Influencer Anna Victoria is making sure she’s tried every possible option as she tries to conceive her first child with husband Luca Ferretti.

The fitness trainer has been open about her struggles with infertility over the past year and a half, and after several months of trying to get pregnant through IUI, or intrauterine insemination, in which semen is inserted into the uterus, Victoria, 30, said that they had to stop.

“We were really just too overwhelmed and stress and exhausted, mentally, and Luca had a hard time seeing me go through everything with all the injections,” she said in a new YouTube video. “So we decided to just take a break from it all.”

Trainer Anna Victoria Tearfully Opens Up About Her Infertility: ‘I Drove Myself Nuts’

Victoria admitted that they had their fingers crossed that the reduced stress would help them conceive naturally, even after the months of infertility.

“We were hoping, like everyone says that as soon as you stop trying, it’ll happen,” she said. “Which is NOT always the case. It was not the case for us. I know that probably a lot of you are hoping to have a happy announcement in this video, which there’s not. It’s okay.”

Victoria said that before stopping the IUI process, she also tried a few different things that she had read about in infertility support groups. She stopped taking her thyroid medication to see if that made a difference, along with increasing her vitamin D levels with supplements and trying a gluten-free and dairy-free diet. But unfortunately, none of those changes helped her to get pregnant.

She also asked her doctors to check on her progesterone level — one of the main hormones that goes to work at the beginning of pregnancies — and to see if she has an MTHFR gene mutation, which prevents the body from converting folic acid to folate, another important part of early pregnancy.

Victoria learned that she does have low progesterone, and had the MTHFR gene mutation, though her doctor does not believe that it had any impact on her inability to conceive. But the experience taught Victoria that she needs to stand up for her health.

“You have to be your own biggest advocate,” she said. “I will never ever discount the hard work that doctors have to do, but some things slip through the cracks and sometimes not every single box gets checked off it’s not their fault at the end of the day it is on us it’s on you to take control of your body of your situation of your life and you have to check off all of those boxes you just be aggressive and ask questions and take notes.”

After their trials and errors, and their break from IUI, Victoria and Ferretti decided that it was time to take the next step and try in vitro fertilization, or IVF, which requires more hormone injections and an egg retrieval, which will be tougher on Victoria.

“It’s been 19 months now that we’ve been trying to conceive,” she said, tearing up. “I know that I’m young, I know that I have time, I know that we don’t need to be in a rush, but I’m just kind of tapped out on the two week wait [with IUI] and the mental and emotional ups and downs, so we decided that we are starting IVF this month.”

With the time needed for egg retrieval and creating the embryos that will eventually be implanted into Victoria’s uterus, they likely won’t have any news until the fall, she said.

“I know it’s gonna be physically, mentally and emotionally really hard on me but I am up for the challenge,” she said.

“Most things happen for a reason. We don’t know that reason yet, but we have faith that we will find out some day.” 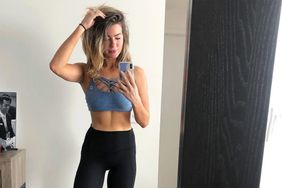 Trainer Anna Victoria Tearfully Opens Up About Her Infertility: 'I Drove Myself Nuts'