Humans Have 'Salamander-Like' Capacity To Repair Cartilage in Their Joints, Study Says

Human beings have something in common with salamanders — and it could be the key to treating joint diseases and osteoarthritis.

Contrary to what scientists previously thought, a new study has found that humans can actually “counteract cumulative damage” in their joints through a process that’s similar to the one used by animals that can re-grow limbs, according to a new study published on Wednesday in the journal Science Advances.

Researchers at Duke Health found that molecules called microRNA, which are “more active in animals that are known for limb, fin or tail repair,” such as salamanders and zebrafish, regulate the process of cartilage repair, according to a press release.

In animals, as well as in humans, microRNAs are found in greater numbers in the ankles and top layers of cartilage, as opposed to in the knees and hips.

In the study, researchers were also able to determine that the “age” of cartilage — which refers to whether any “amino acid conversions” have occurred — found in the ankles is young, while “it’s middle-aged in the knee and old in the hips,” according to the press release.

These findings help explain why ankles injuries tend to be easier and quicker to recover from as compared to hip and knee injuries, and why ankles are less likely to become “severely arthritic.”

“We were excited to learn that the regulators of regeneration in the salamander limb appear to also be the controllers of joint tissue repair in the human limb,” said lead author Ming-Feng Hsueh. “We call it our ‘inner salamander’ capacity.”

“We believe that an understanding of this ‘salamander-like’ regenerative capacity in humans, and the critically missing components of this regulatory circuit, could provide the foundation for new approaches to repair joint tissues and possibly whole human limbs,” added researcher and Duke Professor Virginia Byers Kraus.

RELATED VIDEO:See 6-Year-Old Girl with Cerebral Palsy Prove ‘Anything is Possible’ as She Takes First Steps

Researchers hope that their findings can be used to help develop new treatments to prevent or reverse arthritis — and maybe even lead to the ability to regenerate human limbs one day.

“We believe we could boost these regulators to fully regenerate degenerated cartilage of an arthritic joint. If we can figure out what regulators we are missing compared with salamanders, we might even be able to add the missing components back and develop a way someday to regenerate part or all of an injured human limb,” said Kraus. “We believe this is a fundamental mechanism of repair that could be applied to many tissues, not just cartilage.” 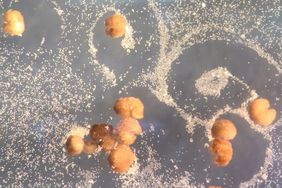 Xenobots, the World's First Living Robots, Are Now Capable of Reproducing: 'This Is Profound'