"When you erase self-limiting beliefs, it tells you, if I can do this, I can do anything," Jennifer Roe tells PEOPLE

brightcove.createExperiences(); Jennifer Roe abandoned her healthy eating habits when she became pregnant with her son, and by the time she gave birth she had reached 255 lbs.

As part of her quest to get healthy physically and mentally, she began running – and recently competed in a 200-mile relay race along with 11 other teammates, who also experienced dramatic weight loss. Roe and her teammates’ stories are the subject of the new documentary From Fat to Finish Line (available on iTunes and Amazon).

“My whole life I was a little bit chunky,” Roe, 43, tells PEOPLE. “I’ve always been on and off a diet my whole life. Then I got pregnant, and I decided to stop watching what I ate because I was like, oh finally, I can just eat whatever I want.”

“It hit me that if I don’t take control of my health, I could develop really horrible issues,” she says. “I was miserable. I could barely move. My knees hurt, my ankles hurt.”

Roe decided to rejoin Weight Watchers – which had worked for her in the past – to lose all the weight she had put on.

“It took me three years to take off the weight,” she says. “The first two years were a slow battle. I still wasn’t really exercising. By year three I found an urge to run.”

In addition to dealing with weight issues, Roe had been struggling with depression.

“I was still heavy, my son had been diagnosed with autism, I was losing my house, and I picked up this self-help book and it said to make 100 life goals,” she says. “One of [my goals] was to a run a ‘5-mile marathon,’ which doesn’t even exist – that’s how much I knew about running!”

The Lodi, New Jersey-based filmmaker decided to sign up for a half marathon, and began blogging about her “absurd journey” to cross the finish line.

“The first day I ran, I ran for one minute and I thought, ‘I’m screwed,’ ” she admits. “But I just kept going and I made it to that finish line.”

RELATED VIDEO: Carrie Underwood on Her Past Weight Loss: I Didn’t Always Do It the Best Way

Running helped Roe drop to 145 lbs. – but the impact of her new hobby was way more than just physical.

“Running has changed every area of my life,” she says. “When you set a goal, it changes you when you train and achieve it. When you erase self-limiting beliefs, it tells you, if I can do this, I can do anything.”

“As a mom to a baby with autism, it was overwhelming, so running was also an opportunity for me to mentally clear out my mind,” she says. “When things were getting hard at home, I could get out and concentrate on running and not on anything else. It was truly ‘me’ time, and it still is.”

When Roe was approached by one of her blog followers to join a 12-person team – all made up of people who had lost about 100 lbs. – running a non-stop, 200-mile Ragnar Relay race from Miami to Key West, Florida, she decided to take the challenge.

“The old me would have never said yes, but I said yes,” she said.

And she doesn’t regret that decision.

“A lot of us grew up overweight, so we weren’t used to being on an athletic team,” she says. “I always wanted to be an athlete, but always felt chubby and clumsy. For me, this was my opportunity to be part of a team and work towards a common goal. It was a very fulfilling experience.”

Roe not only participated in the relay, but produced the documentary film that follows her team’s journey.

“We hope to show that no matter what your size, no matter where you’re at, you can run,” she says. “We want to inspire people to get active, and whether you’re losing 100 lbs. or running 200 miles, if you just keep moving forward you can get to your finish line, whatever that may be.” 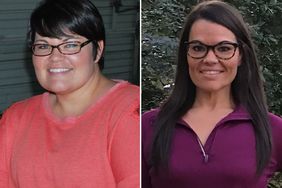