Celebrity fitness trainer and bodybuilder, Amanda “Mandy” Blank was found dead in her Los Angeles home. The trainer was 42.

Throughout her life, the coach and bodybuilding icon worked with many stars including Alex Rodriguez, Mickey Rourke, Marcus Allen, Michelle Monaghan, and Jordana Brewster, according to her website.

Blank was found unresponsive at her Los Angeles home on Monday, The New York Daily News reports. Her housekeeper called 911 after she discovered Blank in the bathtub, TMZ said.

While it is currently unclear how the celebrity trainer died, the Daily News said an autopsy and toxicology report were scheduled by the Los Angeles County Coroner to determine her cause of death.

The news outlet also spoke to a source close to Blank who claimed foul play did not play a likely role in her death.

The Los Angeles County Coroner and a representative for Blank did not immediately respond to PEOPLE’s request for comment.

Blank began her career in fitness at the age of 18. After just one year in the field, she placed 5th in the World Fitness Olympia — a bodybuilding competition — and soon gained professional status.

The trainer went on to become the youngest competitor to win the Internation Federation of Bodybuilding and Fitness (IFBB) World Championships and later claimed the 1998 Fitness Nationals Champion title and the 1999 World Champion title, according to her website.

She also placed first in the 1998 annual Debbie Kruck Classic, a fitness, figure, and bodybuilding competition.

As her bodybuilding success led her to fame, Blank was featured on several magazine covers, including Oxygen Magazine, Glutes Magazine, and Muscle & Fitness Magazine.

Most recently, Blank was working as a fitness trainer and coach, sharing her knowledge and passion for the human body and nutrition.

“Without my health and fitness, I have nothing,” she wrote on her Facebook page.

In addition to her celebrity clientele, Blank worked with people across Los Angeles and beyond, coaching them with her online training and nutritional programs, trademarked as the Blank Body program.

From an early age, Blank had a competitive edge. When she was 17, she was named the Majorette Queen of America title, which is the highest honor that a baton twirler can receive.

She also competed in several gymnastics competitions prior to her start in bodybuilding. 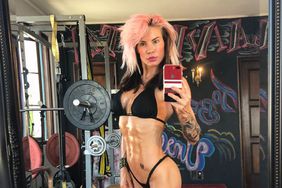