Ed Sheeran is detailing the physical changes he made in his life to accomplish his weight loss goals.

Speaking to BBC Radio 1 over the weekend, the 30-year-old Grammy winner shared what he's been up to since the onset of the COVID-19 pandemic and how he feels healthier than ever.

The "I Don't Care" singer, who welcomed his first child, daughter Lyra Antarctica, wife Cherry Seaborn last August, explained that he began to focus on his health after he got off tour.

"It just happened," Sheeran said. "And because I wasn't having chicken wings and two bottles of wine a night."

Sheeran previously opened up about his healthy lifestyle when he appeared on the Behind the Medal podcast in December 2019. In the interview, the "Perfect" singer said he took up running after he quit smoking to lose weight.

"I stopped smoking three years ago and then ever since then started exercising. I love it," he said at the time, explaining that while his fitness routine usually includes 45 minutes of running in the morning, he sometimes adds in swimming and sit-ups.

RELATED VIDEO: Prince Harry and Ed Sheeran Poke Fun at Their Ginger Hair as They Team Up for Mental Health Day

"I started doing it because when I stopped smoking, I was very aware that my lungs were so full of s— that I needed to clear them out," he said of his decision to start running. "Gyms are good but there's nothing like fresh air to really give you a clean out. That's, for me, the main reason why I started doing it."

Ed Sheeran Opens Up About His 'Addictive Personality': 'It Starts Getting Sad'

In January 2017, Sheeran revealed that he lost 50 pounds, mostly by cutting beer from his diet, after realizing he needed to slim down during his year-long hiatus from performing.

"Now I'm back on beer, because I'm fine, but I cut out beer for a bit and started exercising, which was quite weird," he said during an interview with The Breakfast Club radio show.

The singer also explained that while his performances appear low-key, they actually require a good deal of movement and usually lead to him drop weight. "I jump up and down on boxes, when I'm finished I'm drenched in sweat. I do jump around quite a bit," he said. "And just under those lights, just sweating, you drop off a bunch." 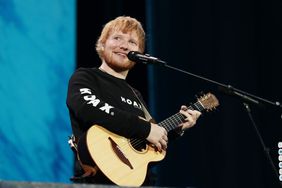