Chloé Lukasiak is opening up about the eating disorders she coped with in wake of her Dance Moms stardom.

In a video posted to her YouTube account, Lukasiak, 20, candidly discussed her struggles with anorexia, bulimia and body dysmorphia following her appearance on the Lifetime series.

"I just want to kind of open up the conversation, because I think it's a really important topic and one that not a lot of people discuss," she said at the beginning of the clip. "It's kind of taboo and brushed under the rug. And I just want to start the discussion because I think it's really important to kind of bring light to it."

Lukasiak previously revealed her struggle with eating disorders in a poem she released online in April 2020. At the time, she said in her latest video, she believed herself to be healthy enough to talk about it — "but it turns out I wasn't."

The young actress said she spent the next year going to therapy and healing from the emotions evoked by publishing her poem.

Her eating disorders started, Lukasiak said, at age 15, about a year or two after leaving Dance Moms in 2014. The former reality TV star said she didn't change her diet in wake of her departure from the show, and noticed changes in her body as a result.

"When I was on the show, I was dancing pretty much every day except for Sundays, so I was burning so many calories and I was just pretty fit and I was able to eat whatever I wanted because I was working out every day," she explained in the clip. "So there were no limits to what I could eat because I knew I would burn it off later. But also, when you're 11, you don't really think about burning off food."

Body dysmorphia, Lukasiak said, was one of the first problems she faced. She felt "unfamiliar with what [she] saw in the mirror" at the time and considered the weight gain "unacceptable" based on her perception of beauty.

"It started as bulimia," she said, "and then a couple of years later when I moved to L.A. — which was when I was 18 years old — then the anorexia started a little bit."

Lukasiak pointed to control as "a big part" of her eating disorders. At one point, she described her body dysmorphia as "out of this world bad."

"It only clicked in the past few months that my body doesn't actually look like what I think it looks like — which is crazy it took this long to kind of kick in," she confessed. "But I'm so happy and so grateful that I'm in the spot I am now."

Three months after beginning therapy, Lukasiak relapsed. But she doesn't look down on herself for doing so.

Now that she is in a new space mentally, Lukasiak sees her body in a more positive light, and while she doesn't love every single part of herself, she's "pretty grateful" for what her body can do.

Lukasiak also tells those struggling with the same eating disorders that they are not alone.

"That was one of my biggest things when I was going through my experience," she said. "I felt so alone and alienated and like I was the only one going through this." 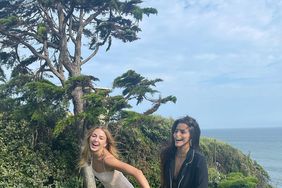