Christiane Amanpour is wrapping up her chemotherapy treatments.

The international journalist, 63, told Good Morning America that she will undergo her final session on Thursday, 18 weeks after they began. Amanpour announced in June that she had been diagnosed with ovarian cancer.

"Tomorrow is my last session after 18 weeks," the CNN anchor said in the interview, calling the process "grueling, fatiguing, tiring, and emotionally wearing as well, not to mention physically and can be scary."

Amanpour said she has been "so lucky" to receive treatment at some of the world's top cancer treatment centers, including The Royal Marsden in London, the MD Anderson Cancer Center in Texas and the Memorial Sloan Kettering Cancer Center in New York.

She then thanked those who supported her in wake of her diagnosis: "Two unbelievable women, a surgeon and [an] oncologist who looked after me, the incredible support of my friends, my family, my colleagues, my bosses — and that has carried me through."

Early detection by both her and her doctor, she added, was critical.

"I would not be swayed when I felt a pain that was unusual and I pursued it to the very end of getting my very first ultrasound, which is the benchmark for then having a baseline to know whether you've caught it early in time, and therefore cure it — and I use that word advisedly — or not. And whether then you're left to manage it and try to deal with it in the best way possible. I was in the first case."

Amanpour revealed her diagnosis during a segment on her show, noting that the weeks leading up to the announcement had been "a bit of a roller coaster." That said, she remained "confident" in her prognosis.

"I've had successful major surgery to remove it, and I am now undergoing several months of chemotherapy for the very best possible long-term prognosis," she said. "I'm also fortunate to have health insurance through work, and incredible doctors who are treating me in a country underpinned by of course, the brilliant NHS."

The veteran reporter lauded early detection in her initial announcement as well.

"I'm telling you this in the interest of transparency, but in truth, really, mostly, as a shoutout to early diagnosis," Amanpour explained. "To urge women to educate themselves on this disease; to get all the regular screenings and scans that you can; to always listen to your body; and to of course, to ensure that your legitimate medical concerns are not dismissed or diminished." 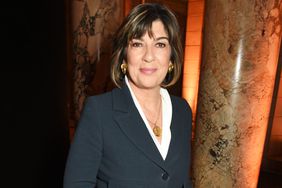