He may play Thor, but Chris Hemsworth has some major fitness competition on the home front from wife Elsa Pataky

He may play Thor, but Chris Hemsworth has some major fitness competition on the home front.

The 34-year-old Australian actor walked the red carpet on Wednesday at the Los Angeles premiere of Marvel’s latest film Thor: Ragnarok with his wife Elsa Pataky by his side, and admitted she is in better shape than he is.

“Yeah, she has a greater cardio skill set, endurance than I’ll ever have, and it’s a little embarrassing at times,” Hemsworth told Entertainment Tonight of his wife. “We have the same trainer, a mate of mine from school that we grew up with, and he very often says, ‘You know what, your wife is much fitter than you are,’ so I’m well aware of it.”

Though it was his big day, Pataky definitely stole the spotlight in a sleek sleeveless black gown that hugged her frame — its high slit giving the perfect peek at her fit legs.

The 41-year-old Spanish model and actress is known for her role as Elena Neves in the Fast and the Furious franchise. The couple, who have been married for seven years, spent the night out without their three kids: daughter India, 5, and twins Tristan and Sasha, 3.

Earlier this month, Hemsworth told GQ Australia that the secret to their marriage is making quality time together a priority.

Still, he admitted that he and Pataky have had their fair share of relationship struggles, especially when it comes to balancing their home and work life.

“My wife and I fell in love, had kids, didn’t really see each other for a few years, then fell back in love,” he said. “In terms of work, [Elsa has] certainly given up more than I have. She’d like me to step back and be at home with the kids more, and of course, I want that too. But I feel like I’m at this crucial point in my career, I’ve just got to set up for longevity or I’ll slip off.”

RELATED VIDEO: Chris Hemsworth Admits His Career Put a Strain on His Marriage

Elsewhere at the premiere, Hemsworth — who was PEOPLE’s Sexiest Man Alive in 2014 — gave his choice for this year’s title-holder.

“Chris Pratt,” Hemsworth said, picking his Infinity Wars costar. “I am in love with that guy. He’s funny, he’s impressive, he’s talented. I’ve got too much love for him.” 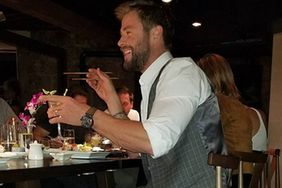