As Britney Spears and Sam Asghari are proving, the couple that works out together, stays together

The couple that works out together, stays together.

Britney Spears and Sam Asghari are further proving they’re #couplegoals after the pop star, 36, shared a workout video of the two of them on Instagram Thursday.

“Stronger together @samasghari 👯‍♀️🍏👯‍♀️,” Spears wrote in the caption as the video began with the star doing suspended sit-ups with her legs wrapped around Asghari’s waist.

Spears continued with her workout as she held a plank over Asghari’s body and did leg lifts with her model beau’s assistance.

In the next sequence, Asghari did push-ups with Spears holding on to his legs as feet rested on his back so she also worked her core with another plank position.

Asghari showed off his impressive strength as he bench-pressed the singer. He followed that with sit-ups of his own as Spears rewarded with Asghari kisses and smiles.

In a final workout routine, Spears successfully held a handstand as she rested her feet against a wall-to-floor length mirror.

This isn’t the first time Spears has featured her boyfriend in one of her popular Instagram workout videos. The “Gimme More” singer shared an Instagram video of herself and Asghari in early April in which the duo showed off their dance moves.

“Some days you just got to dance!” she captioned the video.

Scantily clad in a crop top and white booty shorts, a smiling Spears even gets a lift from her shirtless boyfriend before the pair share a couple smooches.

“See what she makes me do,” Asghari captioned the same video, adding several choice emojis — including a heart.

The couple, who have been dating for more than a year, have become increasingly more public with their relationship.

In early April, the model gushed about the icon on social media. “Not going to wait until t0morrow to express my love for the one that humbles me,” he wrote, adding, “women crush (not only on Wednesdays) but every day.”

The pair were first romantically linked after meeting on the set of Spears’ “Slumber Party” music video.

After their initial meeting, the Spears dug up his phone number out of her bag nearly “five months later,” she revealed in a January 2017 radio interview. 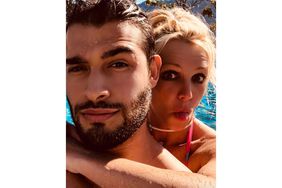