Rapper Boosie Badazz says he was “refused” entry at a Planet Fitness in Georgia over transphobic comments he made about Dwyane Wade‘s daughter Zaya.

Boosie, 37, spoke out about the incident on Instagram Thursday, sharing a video, which shows him pulling out of the gym’s parking lot.

“Do not go to Planet Fitness, they racist. They haters. They just put me out Planet Fitness for what I said about Dwyane Wade son,” Boosie explained. “And they said I said in a video one of they employees was f—— or some s—… They got roaches in that bitch.”

Boosie also addressed Planet Fitness in the caption of the post writing, “Manager who was gay refused to let me n planet fitness because of my past actions on social media about gender etc.”

“Do not support planet fitness,” Boosie continued, sharing the facility’s address. “They have roaches, n they shower water don’t get hot! Get out ya feelings lil bitch.”

Boosie then went on to insult the manager using homophobic slurs.

McCall Gosselin, a spokesperson for Planet Fitness, tells PEOPLE, “Planet Fitness does not tolerate harassment or discrimination of any kind. In this instance, a guest was asked to leave after refusing to comply with gym policies and harassing club staff. We are the home of the Judgement Free Zone and as such, we have policies in place to ensure that we maintain a non-intimidating, welcoming environment for all of our members where everyone feels accepted.”

The Louisiana-born rapper has been under fire after he condemned Wade’s decision to support Zaya’s transition earlier this month.

During an interview with Good Morning America this week, Wade revealed that his 12-year-old, whom he shares with ex-wife Siohvaughn Funches, knew from an early age she was different and had long been aware of her gender identity — it just took her father a little longer to catch up.

“I’ve been a person in a locker room that has been a part of the conversation that has said the wrong phrases and the wrong words myself,” Wade continued. “As I got older and I watched my daughter grow, I had to go and look at myself in the mirror and say, ‘Who are you? What are you going to do if your child comes home and says, “Dad, I’m not a boy … I’m a trans girl.” What are you going to do?’ That was my moment of real.”

Part of the reason why Wade turned inward was because he hadn’t ever had anyone else in his life come out “as gay, as trans, as anything.”

“My daughter was my first interaction when it comes to having to deal with this conversation,” Wade said to GMA. “Hopefully I’m dealing with it the right way. Some people feel that I’m not. But inside our home, we see the smile on her face. We see the confidence that she’s able to walk around and be herself. And that’s when you know you’re doing right.”

The athlete told Roberts that Zaya actually helped educate Wade and his wife Gabrielle Union, 47, on what it means to be transgender, after doing the research herself.

“She is our leader,” Wade said to GMA. “I think when the conversation we had — the one thing about it, for parents, is have conversations with your kids. Zaya, early on, knew two things. She knew straight and she knew gay. But Zaya started doing more research.”

He continued, “She is the one who sat down with us as a family and said, ‘Hey, I don’t think I’m gay.’ And she went down the list. ‘This is how I identify myself, this is my gender identity, I identify myself as a young lady. I think I’m a straight trans because I like boys.’ So it was a process for us to sit down with our daughter and find out who she is and what she likes, and not put something on her.”

Wade first revealed Zaya’s new name during an appearance on The Ellen DeGeneres Show on Feb. 11.

“So once Zaya, our 12-year-old, came home — first Zion, I don’t know if everyone knows, originally named Zion, born as a boy — came home and said, ‘Hey, I want to talk to you guys. I think going forward I’m ready to live my truth. I want to be referenced as she and her, I would love for you guys to call me Zaya,’ ” Wade shared. 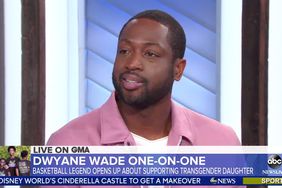 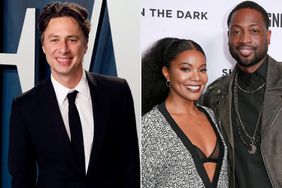