A baby born in Washington with a rare skin condition is surviving against the odds.

Alicia Barber’s son Jamison, 1, was born with Harlequin ichthyosis, a rare genetic mutation that means his skin is covered with hard scales, and requires baths in bleach twice a week and rough exfoliation to stave off infections.

The disease occurs in just one in every 500,000 births, and leads to breathing problems and trouble with mobility.

Barber, 27, was deemed infertile in 2013 due to endometriosis, but after surgery in 2016 to remove excess scar tissue, she was able to conceive. That October, she learned she was pregnant with twins, but one fetus was absorbed during her pregnancy. Then she learned at 7 months pregnant that the second child would likely not make it either.

“I had never heard of Harlequin ichthyosis before the doctor took me aside and showed me a text book with pictures of babies with this condition,” Barber told SWNS. “They had no faces, no hands, no feet and no fingers and toes. It was really traumatizing and they recommended that I terminate the pregnancy.”

“While deciding what to do I was told I’d gone past the point of termination so I had to go full-term. It was scary, I didn’t know what was going to happen with him and the birth was pretty traumatic as well.”

Barber delivered Jamison in an emergency C-section because of his condition, but both she and the baby had further complications after the birth. Barber needed four blood transfusions, and Jamison went into the NICU.

“Despite what the [doctor] said, (he would be stillborn) I delivered Jamison. He came out crying and I knew he was going to fight,” Barber wrote on a GoFundMe page for Jamison. “While in recovery, I kept asking to see him. He was alive!”

Jamison now needs constant care, and along with his bi-weekly bleach baths, he requires two 45-minute water baths each day, followed by rubs with a sandpaper towel to remove the hard skin on his body.

“It is painful for him so he is on morphine, which is scary because he has respiratory issues and it can slow things down and make him sleepy,” Barber said. “He does accidentally swallow the bleach when I’m pouring it over his head and it occasionally gets in his eyes. It is something I dread because he is in pain. He does cry and I have cried quite a few times.”

Barber now cares for Jamison full-time, with help from the hospital and her partner, Kolton Stam, 26. She said that they often get questioning looks from people on the street.

“We do get comments from strangers and the worst ones are about us being neglectful,” Barber said. “Someone said we were bad parents letting him get so sunburn because his skin is quite red in appearance,” she said. “Once a child said that he looked really ‘creepy’ which was quite upsetting.”

Barber’s goal now is to raise awareness for Harlequin ichthyosis, and she was able to raise over $13,000 on GoFundMe so the family could travel to Nashville for a conference on the disease.

“I hope to have this experience to gain more insight on how to care for Jamison and meet his needs better, build new relationships with families who understand, and bring back what is learned to his specialists/providers so we can give Jamison the best life he deserves in working together for him,” she wrote on the page. 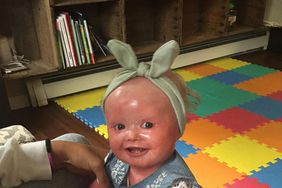 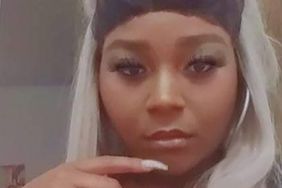