All of the menu items are between 1,500 to 2,300 calories and contain at least a day's worth of sugar, salt or saturated fat

If you’re trying to eat healthy this summer, here are some dishes to avoid at all costs!

The Center for Science in the Public Interest has published their annual list of the unhealthiest dishes sold at chain restaurants.

Named the Xtreme Eating Awards, every menu item that made this year’s list is between 1,500 and 2,300 calories and contains at least a day’s worth of sugar, salt, sodium, or saturated fat.

Among the 8 items that made the list include Sonic’s Oreo Peanut Butter Master Shake — which CSPI says is the equivalent of eating “15 Oreos blended with a cup of lard” — as well as Topgolf’s Injectable Donut Holes, an order of which consists of 1,900 calories, 37 grams of saturated fat, 1,800 milligrams of sodium and an estimated 100 grams of added sugar.

Another sweet offering comes from the Cheesecake Factory, a chain which is a 21-time Xtreme Eating Awards winner. (CSPI has been publishing the annual list for 21 years).

An order of the popular chain’s Cinnamon Roll Pancakes, which is 2,040 calories, is the equivalent of eating 11 of Krispy Kreme’s glazed doughnuts.

Of course, sweet treats aren’t the only offenders who made the list.

The list calls out Cracker Barrel’s Country Boy Breakfast — which comes with three eggs, fried apples, hashbrowns, grits, sirloin steak, a choice of two pork chops or country ham, as well as biscuits with gravy, butter and jam — as well as Jimmy John’s 16-inch Giant Gargantuan sandwich, which is the equivalent of eating 3 regular footlong subs from Subway.

Maggiano’s Today & Tomorrow Pasta offering, which allows diners to take home a free pasta dish with their order, also earned a spot on the list, as did Chili’s The Boss Burger, which jams five different meats into one burger.

In a news release, CSPI went on to point out that while the menu items they called out are certainly unhealthy, there are many other dishes they could have chosen to include.

“Although the 2019 Xtreme Eating winners are nutritional nightmares, plenty of other dishes are as bad or worse,” CSPI senior nutritionist Lindsay Moyer said. “The good news is that all chains with 20 or more outlets are now required to list calories on menus and menu boards, and expanded nutrition information upon request.”

Moyer went on to add that it seems like many chains are all “trying to outdo each other.”

“Pancakes with syrup or cheeseburgers are never a health food, but it seems like The Cheesecake Factory, Chili’s, and other chains are trying to outdo each other to make them worse,” the nutritionist said. “With a third of our calories eaten away from home, restaurant meals warp our perspective of what constitutes a normal serving, and contribute to obesity, type 2 diabetes, heart disease, and other health problems.” 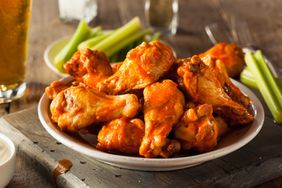 These Are the 9 Unhealthiest Chain Restaurant Meals in America

These Are the 9 Unhealthiest Chain-Restaurant Meals in America 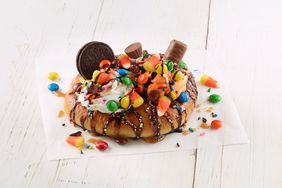 What 5 Dietitians Order at The Cheesecake Factory