Signs on the breadstick bar read "I'll happily marinara you."

Their love is as never-ending as Olive Garden’s pasta.

For Olive Garden super fans Samantha Roberts and Jeff Gilleland, it was a no-brainer to include Olive Garden in their September wedding. The couple had their event completely catered with Olive Garden classics, and the biggest hit of the night: a surprise late-night breadstick bar complete with marinara and Alfredo dipping sauces.

The chain restaurant has played a huge part in the couple’s love story, a representative for Olive Garden tells PEOPLE.

Roberts and Gilleland spent most of their early date nights at Olive Garden. “When you love the chicken parm as much as we do, it becomes a pretty easy decision where to eat,” they told Insider.

It was an easy spot to pick since they were both comfortable there, the couple added to the outlet. Samantha would regularly go with family growing up, and Jeff frequented the restaurant with his soccer team.

The couples’ Olive Garden love continued in 2017 when Jeff won Olive Garden’s Passport to Italy Trip. He worked closely with the Olive Garden team to plan his proposal to Samantha in Italy — and of course she said yes. Once they returned to the states, the lovebirds had a pasta-filled engagement photoshoot at their local Olive Garden.

Their Sept. 7 wedding was fully catered by Olive Garden and included classics like chicken parmigiana, fettuccine Alfredo, and spaghetti for mains, along with bruschetta and chicken and cheese piadina for appetizers. Dessert was an assortment of the restaurant’s Dolcini.

Guests were also treated to a never-ending breadstick bar outfitted with marinara and Alfredo dipping sauces. Special signs were made for the station that read “I’ll happily marinara you” and “To never ending love and breadsticks.”

During the reception, Olive Garden surprised each wedding guest with a special gift: a Never Ending Pasta Pass, which allows customers to eat as much as they want at any Olive Garden for nine weeks. According to the chain restaurant, this gift made Saugatuck, MI the city with the most Pasta Passes this year. 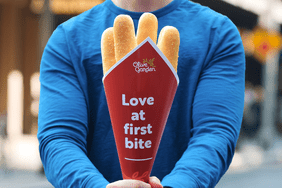 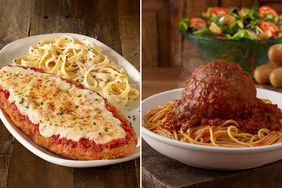