Sandra Bullock and her sister, Gesine Bullock-Prado, carry on late mom Helga's tradition for healthful cooking. "Everything we seem to do at Walton's [Fancy amp Staple] and Bess Bistro stems from family recipes," Bullock tells PEOPLE of her two Austin, Texas, eateries. One recent dish from Walton's: slow-cooked short ribs, a perfect meal for a cold winter's night.

During a tour stop in the Windy City, the pop star ordered the famous chicken and waffles at award-winning chef Art Smith's Table Fifty-Two eatery. "I told her, '[The] 85 lbs. I lost were credited to your music,' " Smith tells PEOPLE. As for his indulgent dish, "It's all about portion control," he says. "You gotta have a little bit of love!"

Get the Recipe: Buttermilk Fried Chicken

When she's not giving the guys a hard time on Entourage, Mazar can be found in the kitchen with her Italian-born husband Gabrielle Corcos. So it made perfect sense for the couple to turn their passion for food into a joint venture: Extra Virgin on The Cooking Channel. "We'd get in the kitchen, drink wine, get drunk, bump hips, listen to music and cook," says Mazar of their typical date nights.

Get the Recipe: Margherita Pizza

Trust pop star Beyoncé when she says her mom Tina's green beans are "life-changing!" "It is the most tasty, delicious dish. And it's green beans, so you don't feel too guilty about eating them," she says. "They taste like steak!"

"I love crumb-topping pies," says Branch, who adds with a laugh, "I was thinking of tattooing the crust recipe on my arm." So how does the singer justify indulging in the decadent treat? "You can't go wrong with apple pie," she says. "If you eat it for breakfast with ice cream, you've got fruit and dairy for the day!"

Is it any surprise that Oprah's favorite health guru is also an accomplished home chef? "I love to help my wife cook," Dr. Mehmet Oz tells PEOPLE. One healthy and delicious dish he loves whipping up is his spicy chili, which he says is a "great energy source with lots of fiber and protein without fat."

Get the Recipe: Spicy Chili

When it comes to making dinner for daughter Megan, 2, and son Ben, 5, Sweeney insists, "I'm not making a different meal for my children and for myself." So the Biggest Loser host and author of The Mommy Diet took her little girl's love of peas and created a family favorite that's "a little more mature and adult" – and a versatile side to serve with chicken, beef or fish.

Get the Recipe: Pleasing Peas and Bacon

While Italian food may not seem like go-to diet food, celebrity chef Batali tells PEOPLE that "it's more about portion control" – that's how he shed 45 lbs., down to 235 lbs. And when it comes to pasta, it doesn't have to be laden with heavy sauces, as Batali demonstrates in his healthy but delicious rigatoni.

Get the Recipe: Whole Grain Rigatoni with Tuscan-Style Cauliflower

What's Paltrow's favorite Sunday family meal for husband Chris Martin and their two children, Apple, 6, and Moses, 4? Turkey meatballs, garlic bread and side of green peas. "The meatballs can simmer away for the afternoon and you only need to make your spaghetti, garlic bread and peas later," says the actress on Goop.com. "The garlic bread takes 15 minutes and is so good, you may want to double the recipe."

Get the Recipe: Turkey Meatballs with Peas and Garlic Bread

"I ate a lot of rice in Nicaragua and was looking for a way to spice it up back home," says the longtime host of Survivor. "I like the website cookusinterruptus.com because they show you how to make it."

Get the Recipe: Fried Brown Rice with Peas and Currants 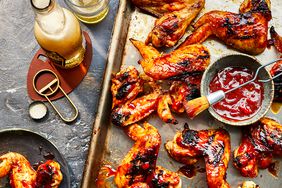 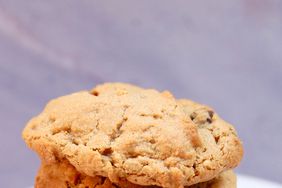 These 5-Ingredient Recipes Are Proof That Less Is More 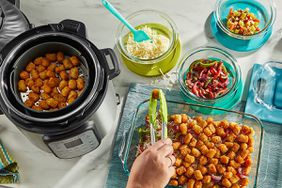