Takeru Kobayashi Details What Competitive Eating Does to His Body: 'My Lungs Get Shifted Up'

The Japanese competitive eater stars in the upcoming ESPN documentary The Good, The Bad, The Hungry

Just watching an eating competition can do weird things to your stomach — but how does it make the athletes who are stuffing their faces with foods like hot dogs and Twinkies actually feel? Well, not great, apparently.

Japanese competitive eater Takeru Kobayashi spoke with the Associated Press on Monday about his preparation for matches like the Nathan’s Famous International Hot Dog Eating Contest, which made him a household name when he broke the record in his rookie year in 2001 for eating 50 hot dogs in 12 minutes.

“I have to put something inside the stomach to make it expand, but it doesn’t necessarily have to be food. I train with water,” he said of his strategy. “So, I’m not training for long periods of time by hauling food. I’m training with water expanding my stomach.”

Whether he’s practicing, or eating in front of a crowd, the task takes a serious toll on his 128-lb. frame.

“I feel so exhausted and so out of breath,” Kobayashi told the AP. “When my stomach becomes very full with that amount of food inside, the organs in my body begin to shift places. So, for example, my lungs get shifted up, and they can’t expand. They have no room to expand. So, when I breathe, I become very short of breath. That’s one of the main things that happens right after eating.”

The 41-year-old is the subject of the upcoming ESPN documentary The Good, The Bad, The Hungry, which focuses on his longtime rivalry with competitive eater Joey Chestnut.

Joey Chestnut Still Dines on Hot Dogs Year-Round: ‘It’s Rare for Them Not to Be in My Fridge’

Kobayashi famously dethroned Chestnut from the Nathan’s winning title in 2001 and continued his streak until 2007. Chestnut went on to beat Kobayashi three years in a row before Kobayashi left the competition because of a contract dispute.

Though Kobayashi no longer competes in the July 4th event (he hosts his own competition in New York City on the same day), the two remain hostile towards each other.

“He doesn’t really want to have anything to do with me, I don’t think,” Chestnut recently told PEOPLE.

“If you ask me, do I want to compete with him? Mmm, not necessarily,” Kobayashi added to the Daily Beast. “I don’t even want to be in the same room with him.”

Despite their personal differences, the pair share an everlasting love for hot dogs. Chestnut told PEOPLE it’s “pretty rare for them to not be in” his fridge. And when recalling to the AP all of the many foods he’s competitively ate including pizza, hamburgers and meatballs, he said, “I savor hot dogs.” 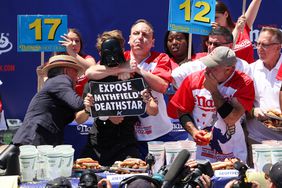 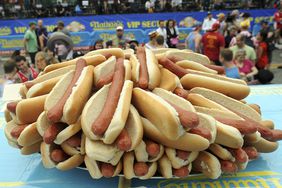 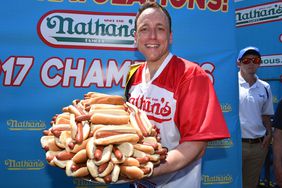 Joey Chestnut Still Dines on Hot Dogs Year-Round: 'It's Rare for Them Not to Be in My Fridge' 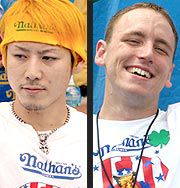 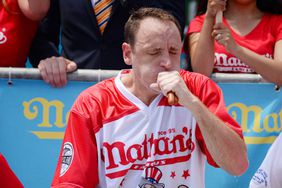 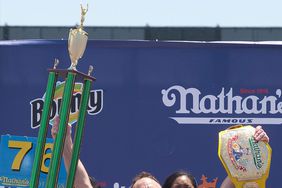 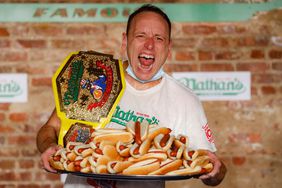 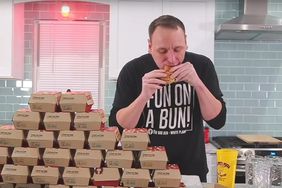