"The suit is without merit, and its drink was inspired by many unicorn-themed foods and drinks trending on social media," a rep for Starbucks told TMZ

There are those who raved about the Unicorn Frappuccino from Starbucks, those who hated the sugary concoction, and now a Brooklyn café is suing over it.

According to multiple outlets, the owners of Williamsburg’s The End have filed a $10 million trademark infringement lawsuit against Starbucks over the colorful beverage.

The Brooklyn café claims in the federal suit that its customers assumed their Unicorn Latte was a “copy-cat or knockoff” of Starbucks’ pink and blue drink named also after a mythical creature. Unicorn Lattes hit the market in December 2016, the suit said, as reported by the New York Daily News. Starbucks debuted the Unicorn Frappuccino on April 19.

“The coordinated social media blitz orchestrated by Starbucks drowned out the fame that any coffee shop in Brooklyn could obtain,” the lawsuit said. “This widespread confusion was made worse by the derision and ridicule that Starbucks’ Unicorn Frappuccino encountered upon launch.”

The New York Post reported that records show The End’s owners applied to trademark the name on Jan. 20 but the application is still pending.

“The size of and scope of Starbucks’ product launch was designed so that the Unicorn Frappuccino would eclipse the Unicorn Latte in the market, thereby harming [The End] and confusing their customers,” the suit said, according to the Post. “In addition to having a highly similar name, Starbucks’ Unicorn Frappuccino shares visual similarities to the Unicorn Latte in that both were brightly colored and featured the colors pink and blue prominently.”

A rep for Starbucks refuted the lawsuit, telling TMZ: “The suit is without merit, and its drink was inspired by many unicorn-themed foods and drinks trending on social media.” 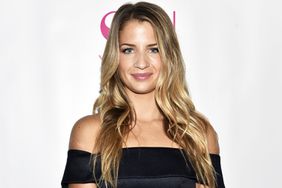