Brunch, James Brunch. Pierce Brosnan, who held the title of Sexiest Man Alive in 2001, took a bite out of life (and some tortilla chips).

If you can't handle the heat, get out of 2007 Sexiest Man Alive Matt Damon's kitchen.

Like 2008 Sexiest Man Alive Hugh Jackman, this cake is a "slice of heaven."

Jackman also makes his own bread from scratch — and then taunted us all on Instagram to "take a bite."

The 2010 Sexiest Man Alive will always choose pie over cake, even for a birthday treat!

And he's handy in the kitchen, too. In 2018, he got to work making his wife Blake Lively's birthday cake.

"I baked this cake for my wife," Reynolds wrote on Instagram, but before you get too jealous, be warned: "The icing is glue, 'cause I'm not a scientist."

Can you smell what The Rock is cooking? The King of the Cheat Day and 2016's Sexiest Man Alive is always making us jealous with his snacks.

"8 slices of sourdough French toast topped with loads of apple pie" makes for a pretty epic meal, don't y'all think?

Did someone say midnight snack?! How about some "World Famous Rock" pancakes?

Are you surprised? Legend's wife Chrissy Teigen has written two cookbooks (and is working on her third)!

Don't worry, Legend also cooks! "I make pancakes every Sunday," the 2019 SMA wrote on Instagram alongside a photo of him with son Miles and daughter Luna. "Regardless of this pic, Miles really enjoyed them."

You wanna pizza this? PEOPLE's 2020 Sexiest Man Alive doesn't mind chowing down, even when he's gotta be in fighting shape.

How serious is he about snacks? "Snacks Are My Love Language," he captioned this montage of him digging in. We'll be right there with a couple bags of burgers. 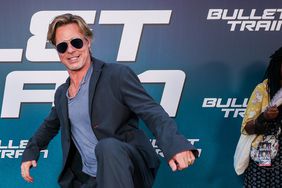