"This is why we can't have nice things," Alicia Jessop wrote in the Twitter caption.

Sometimes the best laid plans are meant to be broken. That’s what Alicia Jessop, a sports law professor at Pepperdine University, found out on a recent trip.

The self-proclaimed “true millennial” wound up with the accidental photo of a lifetime while trying to capture a picture-perfect moment on the coast of Maine. All she wanted was a picture of her lobster roll in front of a lighthouse—but the seagull watching her had other plans and proceeded to swipe the sandwich right out of her hands.

On the website she created after the incident, aptly named seagullstolemylobsterroll.com, Jessop recalled how she took an impulsive trip to Maine after leaving a work conference in Vermont. “I always dreamt of eating a lobster roll on the coast of Maine,” she said. “With a few hours to spare, I booked a rental car and drove through New England to York, Maine.”

Stopping at Fox’s Lobster House adjacent to the city’s famous Nubble Lighthouse, Jessop was thrilled to finally fulfill her dream of eating a fresh Maine lobster roll and ordered one to-go.

“I paid the cashier $21.50 and happily crossed back through the parking lot to enjoy the decadent treat with the light house in view,” she said. “A true Millennial, I realized I was in the midst of the perfect Instagram moment. So I pulled out my iPhone and maneuvered the lobster roll into perfect position. The problem was, as I was busy gearing up for what would become the greatest photograph I have ever taken, my lobster roll was being eyed as prey by local foul.”

As is evident in the photo, a seagull surprised Jessop by swooping down and getting a beak-full of the prized lobster meat. She said the seagull then threw the meat to his friends for them to chow down on, and added that “it was apparent he’d done this before.”

She then went back to the restaurant and ordered another lobster roll—spending a total of $43 on lobster rolls for the day—which she finally got to enjoy.

After, she sent out a quick tweet as she left the parking lot to share the funny experience with her followers. By the time she landed back in Los Angeles hours later, her photo was trending. The original tweet now has over 201,000 likes and 28,000 retweets.

“I had no idea it would go viral, be picked up by news outlets and be shared by people of all backgrounds and beliefs,” Jessop said in the post to her website. “Laughter remains the best medicine. I hope my accidental photograph brings you a smile.” 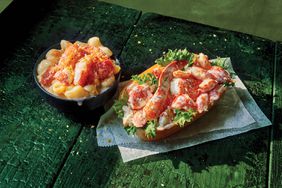