He wanted to encourage people to "eat mor chikin," we assume.

Some things in life are too good to be true, but this is not one of them: A video has emerged of a runaway cow weaving through traffic and heading straight towards a Chick-fil-A restaurant on the side of the road. No, it was not a publicity stunt—this cow just really wanted to “eat mor chikin.”

The hilarious video shows a large, white cow being followed by police cars in Noblesville, Indiana. The cow trots around in front of the city sign for a while before taking off and making a beeline for the local Chick-fil-A—through several lanes of traffic.

The original video, which shows the scene from the perspective of one of the stalled cars, was posted on Facebook by Athena Hopkins on March 16, and has garnered over 1.1 million views. She can be heard laughing hysterically with her husband, Michael E.W. Hopkins, who she tagged in the video, saying “who loses a cow in Noblesville?” to which her husband replies, “I’m dying here.”

This incident is, of course, infinitely funnier because Chick-fil-A uses cows in their marketing campaigns, showing them pleading with customers to “Eat mor chikin” instead of eating burgers.

Even the Noblesville Police Department found the situation funny, despite having to chase the cow around the east side of the city. They asked citizens in a Facebook post to tag them in any photos or videos they had of the runaway bovine, saying “We love to see it.”

We sure do too! 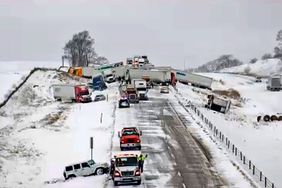 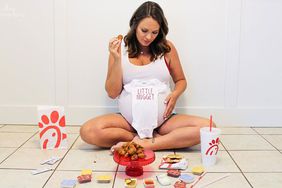