The company announced the new product after teasing on social media

The signature combination of chocolate and peanut butter that a classic Reese’s cup provides is something many would argue can’t be beat—until now.

After teasing the impending launch of a brand new product on social media for weeks with the hashtag #Cupspiracy, the company finally revealed its identity on Thursday: the Crunchy Cookie Cup. The new candy is pretty much the same as the old one, but with the added bonus of crispy chocolate bits dispersed throughout the peanut butter filling.

“You could say this combination is ‘cuptivating,’” senior brand manager Ryan Riess said in a statement. “We’re excited to finally let the secret out of the bag and end the #Cupspiracy – announcing the new Reese’s Crunchy Cookie Cup. You could say we crushed it!”

While maybe not quite as mind-blowing of concept as their Twitter posts leading up to the announcement made it out to be, we got a sneak preview of the candy, and it delivers. The chocolate bits maintain their crunch despite being enrobed in peanut butter and chocolate, providing a delightful textural contrast that’s been missing Reese’s up to this point.

To try them out yourself, you’re going to have to wait a bit. The product will be available nationwide starting in May and comes in the standard size and the jumbo Big Cup size. 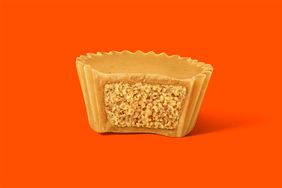