Rachael Ray just celebrated a big milestone, and she did it with a crew in tow.

Ray, 47, and husband John Cusimano, 48, celebrated their 10th wedding anniversary on Sept. 19 with a very special event: a vow-renewal celebration in Castello di Velona, the Tuscan castle where the pair was first married in 2005.

For Ray, their lasting love can be summed up in a poem: Charles Bernstein’s “All the Whiskey in Heaven,” which she recited for her vows.

“It basically says, ‘Under any circumstance, I would still choose you and I would still be with you. And I love you more than all the whiskey in heaven,'” Ray tells PEOPLE exclusively in the new issue, on newsstands Friday.

For Cusimano, whom Ray affectionately refers to as “Johnny Walker” because of his love for Scotch, this message was particularly poignant. “In knowing my husband, there wasn’t a dry eye in the house,” she says.

To help make it an extra special event, the New York-based couple flew nearly 100 of their closest friends and family out to celebrate — a regular ritual for Ray and Cusimano, though the ceremony was unique to this year.

“We’ve done this celebration every year for 10 years,” Ray says, a tradition which is as much about the guests as the couple. “We’re very busy; I have five jobs. We don’t see everybody often enough, and we probably take them and their friendship for granted. But they make us better people for knowing them.”

The event was a total family affair, with Ray’s sister, Maria, serving as the matron of honor, her niece Vivian as the flower girl, and her pit bull, Isaboo, walking her down the aisle. Officiating the ceremony was Cusimano’s bandmate from The Cringe, James “Roto” Rotondi.

Following the ceremony was dinner catered by the castle, which Ray insists she had minimal input on, letting them “do their thing.” Then, the celebrity chef’s favorite part: the yearly pajama party turned rock concert, where her friends form a “supergroup” comprised of all the guests who know how to play an instrument.

“Everybody has to put on their bathrobes and pajamas, except the band,” she says. “They stay dressed in their formals and play until 4 or 4:30 in the morning.”

Among the other notables on the guest list: The couples’ celebrity chef friends, like Guy Fieri, Anne Burrell, Adam Perry-Lang, Michael Schlow, and Ken Oringer, to name a few.

“Recently, they started a new tradition where on Sunday, they break into the kitchen of the castle and they take over and each make a dish.”

This is just one of many big milestones Ray is celebrating this year — it’s also the 10th anniversary of her eponymous daytime talk show and her magazine, Rachael Ray Every Day.

“I have no idea what I was thinking to put all of that together in one year,” she reflects. “It really didn’t hit me until now, 10 years later, that I did all that.”

“It feels like it’s all been one big long day. I feel a lot more confident and a lot more at ease now.”

EXCLUSIVE: Rachael Ray Dishes on Her Wedding Renewal Dinner: 'There Was So Much Food!' 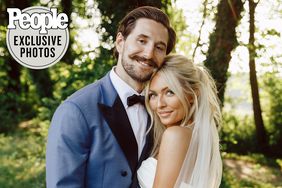 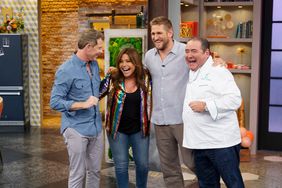