"We like staying up too late, eating the wrong foods, and listening to loud music," says the talk show host.

Rachael Ray plans to spend her 15th wedding anniversary with husband John Cusimano this September in their favorite village of Sarteano, Italy.

“We were married in Tuscany, had our 10-year vow renewal at Castello di Velona, the same Tuscan castle, and are excited to celebrate our 15th wedding anniversary there this fall,” the popular cookbook author told PEOPLE while hosting the annual Heineken Burger Bash at the South Beach Wine & Food Festival on Friday night, which attracted nearly 4,000 people who gathered to taste a variety of hamburgers.

“Sarteano is charming, romantic and beautiful, and since we like to go back each year, I bought some land, and we are now building a house so we can have our friends stay with us in Italy. We are so excited!”

So how do Ray, 51, and Cusimano, 52, keep their long-term marriage so strong?

“We actually like each other, have a lot of the same interests, and find it sexy to share bad behavior, like staying up too late, eating the wrong foods, and listening to loud music—rap, opera and any of our 3,000 records—wherever we are,” Ray said.

“We love being together and not acting our age! We don’t trust quiet people.”

While they do fight—loudly at times—they get it out of their systems, then quickly make up.“When we are mad at each other we scream,” Ray said. “If John is being an a–hole, I tell him, then I feel better. And John does the same thing. We share a great sense of humor which helps.”

Neither spouse can hold things in since they are “both volatile” and believe in open communication despite the decibel.

“We yell to get it out, then move on,” Ray continued.

“We kiss, cut up vegetables, and John makes cocktails.”

But the talk show host and musician are unusually chill when it comes to arranging a dinner time. If one of Ray’s “30-Minute Meals” takes two hours, well, that’s okay. Neither cares what time they eat as long as they do it together with their adorable pit bull Isaboo, 15.

“Another thing we have in common is that we are not schedule keepers,” she said. “We are happy to eat at different times each day, but we like to do the whole process together. It’s great that we really like each other—and I like the music his rock band [The Cringe] plays because you can’t fake liking bad music.”

Secrets from the Set! Rachael Ray Talks the Making of 30 Minute Meals After Its Return to TV

After the initial attraction in any marriage, Ray believes there should be other things a couple have in common to keep life interesting. Since she and Cusimano take their work seriously, yet have light-heartened opinions of themselves, it makes tough days end more gracefully.

“I think if more people would take themselves less seriously, they would be a lot happier in their day-to-day lives,” she says. “We both work hard and find it easy to laugh at ourselves. It works for us.” 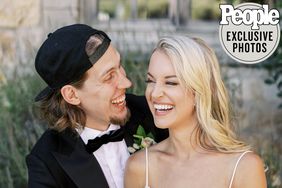 Detroit Pistons' Kelly Olynyk Weds Jackie McNulty in Playful Vineyard Ceremony: 'We Were Meant to Be'