Rachael Ray is certainly no stranger to TV cameras, but she just embarked on some new territory on the small screen.

“I’ve never been given a script to act before,” the celebrity chef tells PEOPLE of her upcoming guest appearance on Freeform’s hit show Young & Hungry airing Wednesday night.

Even though she’s playing herself (and shot on the set of her actual show), Ray says it didn’t come natural. “It’s really a trip when they want you to act as yourself but you have to say certain lines. It’s very weird, because my show unscripted so I can say whatever I want.”

RELATED: Rachael Ray Renews Her Wedding Vows In Italy: ‘There Wasn’t a Dry Eye In the House

While Ray may have felt out of her element, the show’s stars Emily Osment and Aimee Carrero were quite impressed with her chops. “She is the queen of the castle,” Osment told PEOPLE. “She knows exactly what she’s doing; she’s got everybody on a string. I think it is so cool.”

“She’s very much herself. It’s great to be around because there’s a sense of ease when everyone’s just feeling comfortable and being themselves,” Carrero added.

RELATED: We Asked Rachael Ray to Create Burgers for the Presidential Candidates — Here’s What She Came Up With

Though the show centers around Osment as a food blogger, Ray says she doesn’t read blogs herself. “I have five jobs in food, so I know about as much about food as I need to.”

She does, however, turn to more traditional platforms for her recipe ideas. “I’m a voracious reader,” she says. “I still buy cookbooks; I have bajillion of them.”

Other sources of inspiration? Her travels, of course, and even her staff. “The other day I taught a pepper steak burger, and that was the idea of Patty, my hairdresser,” she says.

You can catch Rachael on Wednesday night’s (March 9) episode, airing on the Freeform network at 8 p.m. E.T. 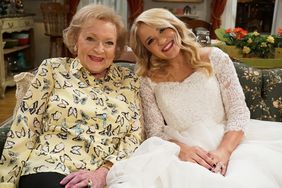 Emily Osment Recalls 'Amazing' Experience Working with Betty White: 'She's Got a Mouth on Her'

EXCLUSIVE: Rachael Ray Dishes on Her Wedding Renewal Dinner: 'There Was So Much Food!'