"'I dunno, guys, I just don't see it,'" Porowski joked of his uncanny resemblance to Mayer.

Antoni Porowski has a twin, and his name is John Mayer.

On Thursday, the Queer Eye star posted an Instagram of himself posing exactly like John Mayer with the caption, “’I dunno, guys, I just don’t see it.’” Apparently, some of his followers were confused by his sarcastic caption, so he clarified by posting a side-by-side photo of his picture next to Mayer’s—and yes, they’re basically identical twins who were separated at birth.

Not only is the pose the same, but almost everything about the two matches up: their hair, their eyes, and their outfit choice. .

“I thought it was an obvious post but apparently not to some,” Porowski—who enlisted the help of his boyfriend, art director Joey Krietemeyer, to help bring the photo to life— captioned the Instagram story.

The “Gravity” singer has yet to acknowledge his uncanny resemblance to Porowski on his own social media.

As the resident foodie on Netflix’s reboot of Queer Eye for the Straight Guy, Porowski shows off his culinary skills by making grilled cheese, avocado salad and grilled vegetables.

Although some viewers have questioned his culinary skills because his recipes are so simplistic, after yesterday, nobody should be questioning whether he is John Mayer’s doppelgänger. 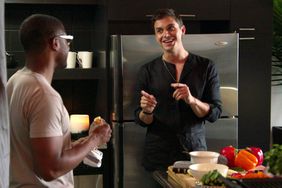