The stars of Bravo’s Real Housewives franchise have never been shy about the work they’ve had done. And now, they’re singing about it!

As if that weren’t enough, Real Housewives of Orange County star Tamra Judge and Morgan’s RHONY cast mate Dorinda Medley got in on the action, making cameos in the video released on Monday.

“Make it nice,” Medley, 54, says in the clip, set in a factory where the Housewives — all in matching jumpsuits — sing and dance as a cast of extras blow up balloon lips and iron out wrinkled sheets.

She’s not the only one quoting her famous Housewives catchphrase. “That’s my opinion,” Judge, 51, screams at one point, a callback to one of her most infamous reunion lines.

“Work Done” is the first time Morgan, 55, has stepped into the studio to record a song.

Williams also recently gave birth to her first child, daughter Pilar Jhena, on March 22. She and the rest of her Housewives filmed the Fiber One video in late June, days before many of them united again at the New York City Pride Parade.

The video is part of a marketing campaign for Fiber One, who has made some changes to its products.

A series of low-carb, low-calorie chewy and protein bars are also included in the brand’s new line. 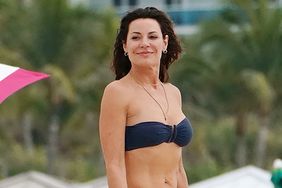