The 26-year-old slugger named his creation the Polar Burger, after his "Polar Bear" nickname

Forget peanuts and cracker jacks — for reigning MLB Home Run Derby champion Pete Alonso, a day out at the ballpark is all about the burger.

The New York Mets' first baseman has joined forces with the team's senior executive chef for a hamburger of his very own to be served at Citi Field in Queens, New York, the first time the Mets have ever introduced a food item as part of a partnership with a current player.

In a nod to his "Polar Bear" nickname, Alonso, 26, has named his creation the Polar Burger.

"A lot went into this, a lot of brainstorming," the self-proclaimed foodie recently told reporters, including PEOPLE. "I love food, and the biggest thing for me, when I'm in the kitchen or when I'm eating, is using simple ingredients to be able to bring out a super delicious, dynamic and great flavor to the meal."

All of the ingredients are sourced locally from New York state, from places like Mike's Hot Honey and Jake's Gouda Cheese, something the slugger said was of the utmost importance to him.

"We wanted to have it be something of substance, but not too filling," he said. "I always have a beer with a burger at a ballgame… [so] I didn't want to just put this big, massive thing on a plate and just be like, 'Here you go, have fun.' We don't want people feeling like they need to have a wheelbarrow to get them back on the train or back in their car to drive home because they're too damn full."

"I hope fans really take to this and I really hope that these things sell out every single game because they're damn good," he added.

Citi Field, located in Flushing, has established itself as something of a foodie haven, and trendy New York City eateries such as Dō edible cookie dough and Fuku chicken all have outposts there for hungry fans. An Instagram account highlighting the latest and greatest, @amazinmetsfood, has even racked up more than 12,000 followers.

Sports stadiums have in recent years upped their offerings when it comes to game time concessions, drawing in crowds with mouthwatering menu items like fried chicken and red velvet waffles at FedEx Field, home of the Washington Football Team, and elk stroganoff, which can be found at the Green Bay Packers' Lambeau Field.

Alonso's Polar Burger will be on sale at Citi Field starting on Friday. 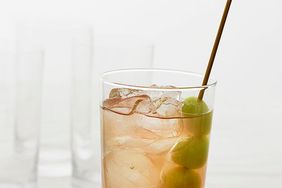