The controversial plates are currently being removed from all Macy's stores

A line of decorative plates has been pulled from Macy’s stores after the company received complaints that they conveyed a body shaming message.

The controversial plates had a diagram written on top with portion sizes measured as either “skinny jeans,” “favorite jeans” or “mom jeans.”

Alie Ward, a writer and podcast host, ignited the conversation after she tagged Macy’s in a tweet on Sunday. “How can I get these plates from @Macys banned in all 50 states,” she wrote beside a photo she took of the dishes in a display at the Macy’s flagship store in New York City.

Within hours, Macy’s had reached out to Ward on Twitter, letting her know that they would be pulling the product as soon as possible. “Hi, Alie — we appreciate you sharing this with us and agree that we missed the mark on this product,” Macy’s wrote. “It will be removed from all STORY at Macy’s locations.”

STORY at Macy’s is a brick-and-mortar retail initiative in which small businesses are given space in-store to sell their products that follow a certain theme. The plates, created by a company called Pourtions, were for sale in STORY at Macy’s. They were never available online on the Macy’s website.

Though they were pulled from Macy’s, the plates are still available on Pourtions website, where they are being sold for $9.50 each. The product description on the website reads, “There’s nothing like broken-in, faded, ripped-in-the-right-place jeans. They look great, and more importantly, they fit great. So, keep your eye on the middle circle and you’ll always be in fashion.”

Complete with plates, bowls, wine glasses and more, Pourtions describes their product collection as “a humorous + healthy way to watch what you eat + drink.” Other controversial product messages include the measurements of “on the lips” vs. “on the hips” on a wine glass; “feed me” vs. “feed bag” on an appetizer plate; and “manicotti” vs. “man overboard” on a pasta bowl.

While many body-positive Twitter users were happy with Macys’ decision to pull the product, other Twitter users criticized Ward for speaking out. “If you don’t like them, don’t buy them,” wrote one person. “The world doesn’t revolve around you. Sit down.”

A representative for Pourtions could not immediately be reached for comment by PEOPLE.

According to the Washington Post, Ward was surprised when she saw that Macy’s had responded positively to her post. “Companies, people, everyone screws up,” she told the outlet. “It’s not about being perfect or tiptoeing, but it’s just about listening when someone says, ‘yeah, no.’” 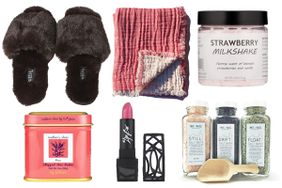