She is the lord of the onion rings!

Lorde revealed herself as the creator of the now-deleted Instagram account, @onionringsworldwide, during her appearance on Thursday’s Tonight Show.

“I naively didn’t realize that it would be a thing that I was going to different places and trying the onion rings at each of those places,” the New Zealand native told Jimmy Fallon.

“I think they’re underrated as well. I don’t think they get enough credit,” the two-time Grammy winner agreed with Fallon of the golden fried appetizer.

Before the account was taken down, @onionringsworldwide garnered a total of 24 followers, including Lorde, Universal Music promotions director Justin Warren, and Lorde’s keyboardist Jimmy Mac, according to Newshub.

Lorde revealed her foodie side during her many concert stops and promotional appearances ahead of the release of her new album, Melodrama.

FROM PEN: Feed Your Friends Butterburgers and Grilled Guacamole on Game Day

ICYMI: The onion rings she spoke highly of came from Bareburger in New York City and a tempura onion ring from Tennessee.

And if you trust Lorde’s recommendations, she advised not eating the onion rings from Gowings Bar & Grill at the QT Hotel in Sydney. “Bit of a heavy, dry mouth feel. 2/5,” she rated the breaded onion rings.

She also highly dislikes Burger King’s onion rings. “I didn’t actually know Burger King did onion rings, and good thing I didn’t because they are not good. 1/5,” she wrote. 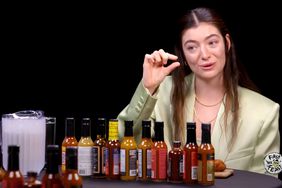 Lorde Details Her Exact Specifications for the Perfect Onion Ring, from Size to Texture