Bo O'Connor shares tips on how Lady Gaga stays fit and healthy on the road.

There are plenty of ways Lady Gaga stays healthy while on the road, but if she had to choose just one it’s safe to say she would give thanks to a gal pal who’s been by her side since day one.

PEOPLE caught up with Bo O’Connor, the singer’s childhood best friend turned tour chef, at Buick’s Encore Backstage Classesat the Ace Hotel in Palm Springs, California during Coachella, where Lady Gaga made history as the first woman headliner. And from Kindergarten through high school and onto stardom, O’Connor says their friendship “really hasn’t changed and that’s the most amazing part.”

“Whenever I get to see her, it really feels like we are teenagers again just gossiping and talking about whatever is happening in our lives,” the chef says about reuniting with the singer when they both get a break in their hectic schedules (O’Connor recently opened her own restaurant in Queens, New York called The Pomeroy).

Before O’Connor opened her restaurant, Gaga approached her about the possibility of her joining her on her “Joanne” worldwide tour as her personal chef—an opportunity she couldn’t pass up.

“People always ask ‘what’s it like with your best friend being your boss?’ and I just tell them when you’re working, you’re working and it’s professional and that’s it. When you’re off you can be friends and whatever, but it’s a job and I took my job very seriously, and, for me, I think it made me a better chef,” she says. “You have to be super organized and know where you’re going; it’s a lot of meal prep, going to the fresh market and all that stuff. It’s a blast. It’s different in every country and it was a wonderful experience.”

Though the “Born This Way” singer’s favorite foods are “very much mood driven,” there are a few dishes that O’Connor tries to whip up on the daily, like salad and smoothies.

“She definitely will always have a salad throughout the day whether it’s for lunch or dinner,” says O’Connor. “The salad can be different and change; it doesn’t always have to be super lettuce-based, rather it can have other components that are a little bit more satisfying.”

“She likes natural based smoothies,” she continues, “vegan with coconut, coconut water, all fresh, and she tries to be very good at that on tour.”

After a long day’s work and burning calories from rocking on stage, the superstar does deserve an indulgence of her choice. And while the craving is sometimes one that’s sure to come with a sugar high, there are some countries where the fruit is so good that it fulfills any type of sweet need—with no guilt!

“When we were in Tokyo, the fruit and produce was insane—it’s to die for—so she definitely has a sweet tooth sometimes and likes chocolate and such, but in Japan the fruit is so amazing that you eat that and that’s your indulgence,” O’Connor says.

Thanks to a health-driven chef who’s so keen on keeping filling Mother Monster’s body with the “good stuff” (and celebrity trainer Harley Pasternak, who got her back into tip-top shape after she “essentially had a hip replacement in 2013 and was in a wheelchair, unable to exercise for a while,” he tells PEOPLE), it’s safe to say Lady Gaga has learned from the best in every industry.

As for what you’d generally find in Gaga’s fridge? “[It’s] filled with water, kombucha, some type of unsweetened ice tea, definitely greek yogurt and almond butter or any type of nut butters, and lots of types of fruits and vegetables—kale, swiss chard, lemons, limes, ginger,” says O’Connor.

And aside from wholesome food, you just might run into Lady Gaga herself.

“It’s really funny because I will kick her out of my kitchen because she likes to cook,” the chef says about the singer, who grew up in an Italian family who was always cooking fresh meals. “I think it’s fun for her and it’s cathartic.”

“Some people hate it, but she actually enjoys it,” she adds, “Just getting your hands on what you’re eating—there’s just a very much fun aspect to it.”

Danica Patrick Stocks Her Tour Bus with Fresh Groceries to Stay Healthy Between Races: 'I Don't Believe in Cheat Days' 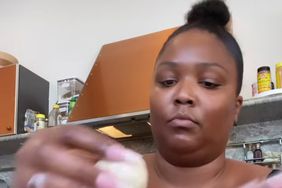 Staying Healthy During the Holidays Can Be Tough. Luckily We've Got Some Awesome (and Easy) Tips

Hungry Girl: 5 Food Fakers You Need to Know About 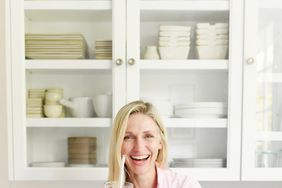 Yes, You Should Put Frozen Cauliflower in Your Smoothie—Plus More Hacks From Catherine McCord