UPDATE: When KFC pulled its genius marketing stunt of only following 11 people on their Twitter account: six men named Herb and five Spice Girls, one fan spotted it all. That fan has now been personally rewarded for his findings by the fried chicken chain.

The reward was a gold-framed portrait of fan @edgette22 being carried by the late Colonel Sanders.

“Dreams DO come true. #GiddyUpColonel Thanks @kfc” he tweeted.

Wieden+Kennedy, the same ad agency who worked on Old Spice commercials, are supposedly the masterminds behind the painting.

KFC just won over the internet, and it’s all because of their strong social media game.

One of the users that KFC follows, writer Herb Scribner, knew something was up a few days ago, tweeting: “So @KFC just followed me, five other people named Herb and … the Spice Girls. That’s cute.”

It’s unknown how long KFC has been patiently waiting for someone to notice their marketing move, but people are just now losing their minds over it.

WATCH THIS: How to Make the Perfect Fried Chicken Sandwich from the Institute of Culinary Education

Even Wendy’s, though salty, is tipping their hat to the Twitter stunt writing, “Just realized they weren’t following back. Rude. Good joke though.”

KFC, who recently reintroduced Colonel Sanders with actor Ray Liotta on their commercials, has been working all of their marketing angles. But this one wins everything. 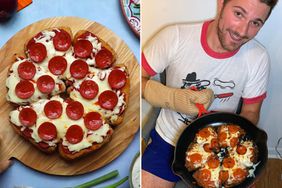