Kate Hudson Wants to Be a 'Female Disruptor' in the Liquor Industry - So She Created Her Own Vodka!

Kate Hudson’s career spans acting, fronting two fashion businesses (Fabletics activewear and Happy x Nature) and co-hosting a brand new podcast with older brother Oliver Hudson. And when she’s not on call for work, she’s on call at home with her three children. But the multi-hyphenate star’s busy schedule did not stop her from branching into a totally new space: the liquor industry — an area in which she feels women are underrepresented.

“I get a lot of business opportunities, which I’m really grateful for, but this one was very interesting to me because there is such a huge white space for women in craft vodka — and vodka in particular is 56 percent consumed and bought by women,” Hudson told a crowd of editors and industry tastemakers Monday night at King Restaurant in New York City. “There’s a very small, amazing group of women in spirits — but it’s small. So that was really intriguing to me. As a female you are a disruptor in this space.”

King St. Vodka (which retails for $24.99 a bottle for those in need of an affordable holiday host gift) aligns with Hudson’s health-conscious lifestyle. It’s gluten-free, crafted with alkaline water and 7x distilled for purity in Santa Barbara, California. The brand’s name is inspired by the star’s memories of her former home on King Street in New York City, which served as the backdrop for Monday’s special launch event.

“This whole process has been a blast,” Hudson, who partnered with businessman David Kanbar, co-creator of Skinnygirl with Bethenny Frankel and Bulldog Gin, told PEOPLE at the gathering. “I have a lot more to learn, but it’s one of the most on-brand businesses I’ve done yet. This is a celebration of this one little gem that we created, and now we get to enjoy it and hope other people enjoy it.”

She added: “With all of the things I do, liquor is usually needed — whether it’s a premiere, a Fabletics party, or a Happy x Nature clothing launch. It’s the perfect edition to my other projects. We love hosting a party and now I can provide free vodka!”

To prove she’s all-in on her latest venture, Hudson even got behind the bar at Monday’s event to show everyone how she makes her favorite cocktail: an “extra-dirty” vodka martini.

“It’s my go-to,” she shared. “Straight and salty and not a lot of calories.”

Hudson also told PEOPLE that she hosts a lot of King St. cocktail hours on the set of her new podcast, Sibling Revelry, alongside brother Oliver.

“We’re having so much fun,” she said. “What’s interesting about the aftermath of starting the podcast is we didn’t realize the kind of impact that we were not only having on ourselves and our relationship but on other siblings.”

“It’s having a stronger impact than I think Oliver and I thought it would,” she added. “Everywhere I go, people are talking to me and opening up. They love it — and we love the dialogue it’s starting.” 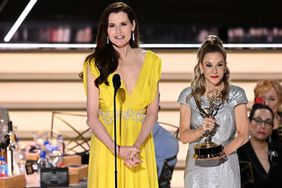