Need a reminder that true love does exist? Look no further.

To commemorate their upcoming 50th wedding anniversary on Dec. 22, Ina posted this photo of her and Jeffrey from the day they said “I do.” Decked in ‘60s fashion, the pair left their reception “tennis racquets in hand,” she wrote. “It’s been an amazing 50 years!!!”

Adventure of a Lifetime

In 1971, Ina and Jeffrey spent four months camping around Europe. “How about those outfits and the ‘70’s hair??” she posted on another throwback to celebrate their major marriage milestone.

The Barefoot Contessa star shared this adorable photo in 2016 of her wedding day in 1968. At the time, Ina was 20 and Jeffrey was 22. The ceremony took place at her parents’ house—which she describes as “a very contemporary rock cliff in the woods in Connecticut.”

Ina wished her hubby a Happy Valentine's Day with another photo from their wedding—this time showing off the elaborate cake. “Right in the middle of the ceremony, it started to snow," she told PEOPLE of the big day. "It was beautiful and romantic, but by the end of the party, the poor guys parking cars had to dig everyone out!”

“We got married young because I felt great when I was with him. I trusted him. He had good values. He was fun to be with,” says Ina (with Jeffrey during his Army days in 1970).

“We’ve never been manipulative with each other,” says Ina (playing tennis with Jeffrey in 1971). “We were always honest with one another about exactly who we were.”

“Earlier in our relationship, I was more frivolous, and he was more serious,” says Ina (with Jeffrey in Washington, D.C., in 1976). “And I think now he’s become more fun, and I’ve become a little more serious.”

“When I told him I wanted to move to New York and open a food store, he said, ‘Let’s move to New York!’ ” says Ina (with Jeffrey in the Hamptons in 1979). “That he would not object to moving to a different state for my career was so unusual, particularly 40 years ago.”

"Starting the year at our favorite monument in Paris!!" Ina wrote on New Year's Day in 2015 outside the Eiffel Tower. The chef has always adored Paris and the couple own a pied-a-terre in the 7th Arrondissement. Get her mini guide to the city here.

“We go to Paris as much as possible,” Ina says of their favorite vacation destination. “I don’t think you can be alive and not find it magical.”

The cute pair took a walk in their hometown of East Hampton, New York ahead of the season premiere of Cooking for Jeffrey in 2016.

Jeffrey—one of Ina's greatest taste testers—took a bite out of a slice of pizza during a shoot for Cooking For Jeffrey with restaurateur Matt Michel of the Greenport, New York food truck Rolling in Dough.

Ina and Jeffrey posed for a photo shoot for PEOPLE in 2016 at their East Hampton, New York home. It's there that the chef spends most of her time testing recipes for her many cookbooks, while Jeffrey teaches at Yale University in New Haven, Connecticut during the week, and the two reconnect on Thursday. "We're always texting each other and calling," she told PEOPLE of their time apart. "But I have to say I really look forward to Thursday or Friday when he comes home and the weekends are sacrosanct."

Ina clearly gets especially gushy on Valentine's Day. "48 years and I'm just getting started!" the cookbook author wrote in 2017.

Through his appearances on her cooking shows, Jeffrey—pictured looking through Ina's extensive cookbook collection—has garnered his own fan following. “There are times when I’m at the airport and I’m sitting having a meal or a snack alone and I look up and suddenly I’m surrounded by people,” he told PEOPLE. “They want me to sign their napkin, anything. I’m always very embarrassed.” 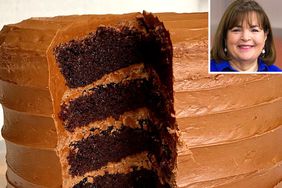 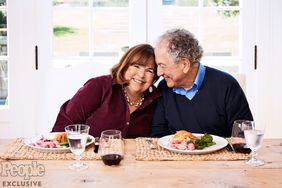 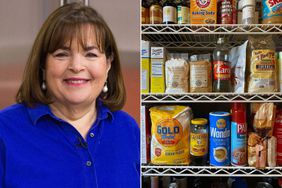 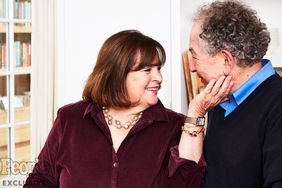 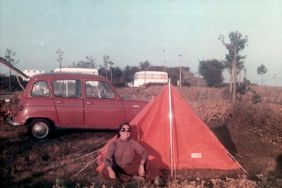