Gwen Stefani and Blake Shelton Host Family and Friends for an 'Okie vs. Cali' Beer Tasting

Gwen Stefani and Blake Shelton had a beer off with beverages from their native states of California and Oklahoma, respectively

Gwen Stefani and Blake Shelton celebrated their Memorial Day Weekend with a boozy competition that pitted their home states against one another.

On Sunday, the engaged stars hosted family and friends for a beer tasting that involved the group sipping — and rating — beers from Stefani's native California and Shelton's native Oklahoma.

Stefani, 51, documented the festivities on her Instagram Story, starting with a sweet snapshot blowing kisses to Shelton, 44.

Next, Stefani shared a list of eight beers that the group seemingly tried with written notes beside each selection. She also posted a video, captioned "Beer tasting Okie vs. Cali," of herself trying one of the beers and saying, 'This creamy one is quite good."

The former Voice coach went on to show off an abundance of beers all in brown paper bags (to hide the labels) each with numbers written on them. In the next slide, Stefani's brother Todd and his wife Jennifer opened two beers back to back, one from Oklahoma and one from California. After opening the second beverage, the pair began dancing and singing to "California Love."

Another snap from the outing featured Todd, 47, posing next to an F5 IPA beer, a Native Amber can, and a "Horses--- Participation Trophy."

Stefani concluded the day's posts with a sweet selfie of the singer and her 12-year-old niece Stella posing together while wearing matching hoodie sweatshirts.

Stefani and Shelton met as fellow coaches on The Voice in 2014 and later announced their relationship the next November. In October 2020, Shelton proposed to Stefani at his Tishomingo, Oklahoma ranch.

Shelton recently shared his first impression of the No Doubt frontwoman to PEOPLE: "She surprised everybody with a performance of 'Hollaback Girl,' and then they announced that she was going to be a coach."

"I remember enjoying her performance, and then after the show, we all took a group picture," he continued. "It was very much an industry-type meeting, and I told people, 'I met Gwen Stefani. That's crazy.' "

Stefani, who shares sons Kingston, 15, Zuma, 12, and Apollo, 7, with ex-husband Gavin Rossdale, said in December during an On Air with Ryan Seacrest interview that she prefers her wedding to Shelton to "not be a COVID situation."

"I would say I just want my parents there at this point," she said. "I would rather not have masks and that kind of thing. Even when you cut it down to just family, it's too many people for COVID so we're going to see what happens in the next few months." 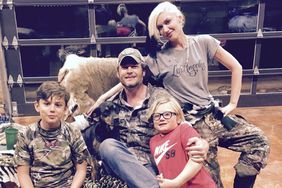 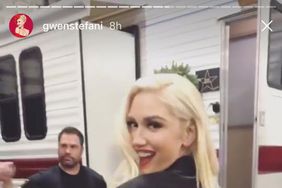