Guy Fieri Talks Television Fame, Home Cooking and Teaming Up with Tom Brady for a Good Cause

The Food Network star also says he eats at restaurants "less than anybody you've ever met."

He may be known for visiting restaurants across the country on Diners, Drive-Ins, and Dives, but Guy Fieri says that he actually doesn’t eat out that much in his day-to-day life. In fact, he prefers to keep things healthy at home with whole grains and lots of greens.

“I eat out less at restaurants than anybody you’ve ever met, because I do a lot of that on [the show],” the Food Network Star told PEOPLE. “My favorite thing to do in the world is cook [at home.]”

And despite the fame he’s garnered from his culinary talent, Fieri says that was never the goal. “I wasn’t supposed to be on TV; I don’t know how that happened. That has been great, but what I really love to do is cook.”

And that’s just what Fieri did on Friday evening at Harvard Stadium in Boston, MA, where he hosted the second annual Guy Cooking with Best Buddies Celebrity Chef Food and Wine Festival. The organization dedicated to ending the social, physical and economic isolation of people with intellectual and developmental disabilities (IDD).

Also part of the evening was the annual Best Buddies Football Challenge, co-hosted by Tom Brady. Playing quarterback for both teams, Brady brought his son Jack onto the field to rumble with fellow players like Julian Edelman and Danny Amendola (whose girlfriend Olivia Culpo was also present), as well as a bevy of other current and former Pats.

Inside the main event, the press-shy Tom Brady did get onstage to make some quick remarks.

“It’s such a special event, and it’s grown so much It’s great because everything we do is focused on these wonderful, wonderful people,” the NFL star told the audience, who hopped from food station to food station featuring chefs from top Boston restaurants like Davio’s Northern Italian Steakhouse, Mike’s City Diner, and Rino’s Place.

Brady also used his golden arm to throw 25 footballs into audience to eager bidders for the price of $2,000 each—the cost it takes to send two Best Buddies to a special leadership conference.

But the event has a special connection for Fieri, who told PEOPLE of his close relationship with his cousin, Dougie, who has intellectual disabilities.

“Growing up, we were about the same age, and we just knew Dougie was a little bit different,” he said. “But he was always part of our family. And as I got older and became a teenager, you start to understand that not everybody else understands that folks with ID are the same as everybody else, their situations are just different.”

FROM PEN: Poach a Perfect Egg Everytime With a Foolproof Microwave Hack

“When people don’t understand something, especially in this country and this culture, they either embrace it, or neglect it, or have a prejudice about it. And so that always really bothered me,” Fieri continued.

Speaking of his own children, sons Hunter and Ryder, Fieri said he feels a special responsibility to convey the importance of embracing people’s differences.

“I raised my kids to embrace everybody equally,” said Fieri. “That’s the way i was raised. My parents were always very community minded, and interested in supporting the fellow person, because in today’s world, it’s really tough.”

As for his cousin Dougie, Guy says he still comes to the event every year. “He’s down working at one of my stations right now!” he added.

Also present for the big kick-off was actor Jason Lewis, Massachusetts Governor Charlie Baker, and Founder and Chairman of Best Buddies, Anthony Shriver. Following the big event at Harvard Stadium was a 20, 50, or 100-mile bike ride where 1500 cyclists pedaled their way to Hyannis Port on Cape Cod. 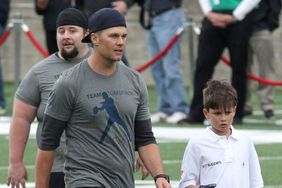 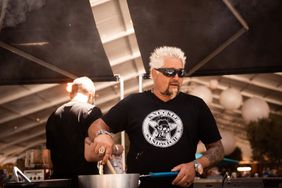