The cookbook author and chef made her first appearance back on the talk show since her awkward segment with the actress.

Giada De Laurentiis is back for a second chance!

The cookbook author, chef and restaurateur returned to The Ellen DeGeneres Show on Monday for another cooking segment—her first since having an awkward (and hilarious) time making artichoke arancini and focaccia with host Ellen DeGeneres and fellow guest Nicole Kidman.

“Last time you were here, we had a few hiccups,” says DeGeneres. “It was Nicole Kidman’s fault.”

“She’s not here, right?” De Laurentiis says while looking around the set. “I know you surprise people with people coming out of things.”

Giada De Laurentiis Opens Up About Finding Love Again After Divorce: ‘I Felt Like a Kid Again’

“The thing is, they were sitting out too long,” DeGeneres says looking back on the moment. “I think someone made them way earlier in the day. So that was the problem. This time we don’t have that problem but I’m glad you came back.”

“I hope not. I’ve only checked every 30 minutes for the last four hours,” De Laurentiis says.

After DeGeneres assured De Laurentiis that the Academy Award-winning actress was nowhere in sight, the duo got started on making a few recipes from the chef’s new cookbook Giada’s Italy. This time, the Food Network star wasn’t taking any chances, and started with a simple spritzer.

“I figured if we got you drunk enough you wouldn’t know the difference and you would just love everything,” says De Laurentiis, who recently opened her new restaurant Pronto by Giada at Caesar’s Palace in Las Vegas.

After whipping up an avocado bean dip—which caused DeGeneres to swear when De Laurentiis accidentally squirted lemon on her shirt—they moved on to make mini heart-shaped pizzas (get the full recipe below).

The segment didn’t exactly go as planned, but De Laurentiis was determined to assure viewers not all of her recipes come out tasting “tough.”

“Now this is to redeem myself from Nicole Kidman,” De Laurentiis tells DeGeneres.

After having a little fun throwing dough back and forth (including one point where De Laurentiis gets smacked in the face by DeGeneres’ throw), they finish making their pizzas and go in for the taste test.

“I wish Nicole were here,” De Laurentiis says after taking a bite. “She would like them.”

Watch the full clip above and get De Laurentiis’ recipe below.

1. Preheat oven to 375°F. Place pizza dough in a lightly oiled bowl; cover with a towel, and allow to rest in a warm place 1 hour. Meanwhile, pierce each tomato with the tip of a paring knife. Combine tomatoes, olive oil, salt, garlic, and basil on a small rimmed baking sheet. Toss to coat, and roast in preheated oven until tomatoes begin to blister, 25 to 30 minutes. Set aside to cool.

2. Increase oven temperature to 425°F. On a lightly floured surface, use a rolling pin to roll out the pizza dough to ¼-inch thickness. Using a cookie cutter or the tip of a sharp knife, cut out 6 (5-inch) hearts, and place on a rimmed baking sheet. Bake at 425°F until lightly puffed and beginning to brown, about 14 minutes, flipping after 7 minutes. Remove from oven, and cool slightly.

3. Slice the hearts in half horizontally, as if you were making a sandwich. Divide the cooled tomato mixture and mozzarella evenly among the bottom halves, and sprinkle evenly with Parmigiano-Reggiano. Replace the tops; brush with extra-virgin olive oil, and sprinkle with oregano. Place on an unrimmed baking sheet, and bake at 425°F until cheese is melted and tops are golden, about 5 minutes. Serve warm, drizzled with more extra-virgin olive oil. 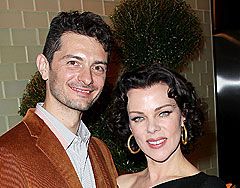 Debi Mazar: The Joys of Cooking Drunk and Making Lamb for Madonna 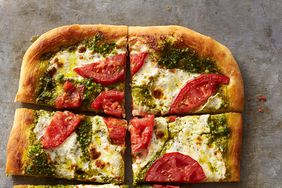 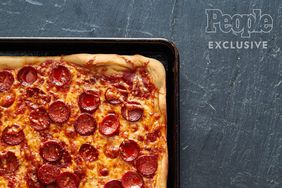 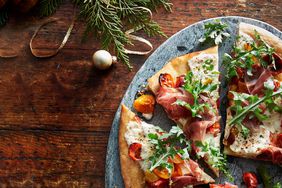 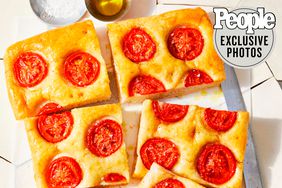 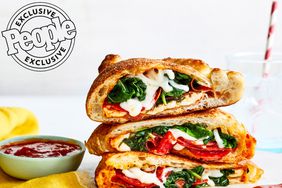 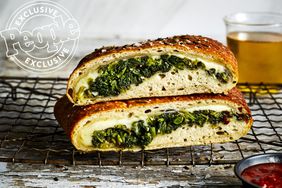 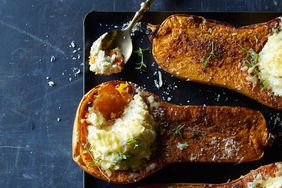 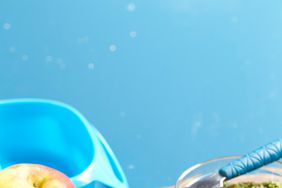