Inside George and Amal Clooney's Food Tour of N.Y.C.

These two can't get enough Italian food! The couple dined out at Carvaggio, an Italian restaurant in N.Y.C.'s Upper East Side neighborhood, and were joined by two very special guests – Amal's parents, Ramzi and Baria Alamuddin. George looked ever the gentleman escorting his mother-in-law into the restaurant.

It was all about family for Amal on April 18, when she and her cousin Tarek Miknas dined at this Italian cafe in Greenwich Village. The pair chatted over thin-crust pizza and espressos in the restaurant's outdoor garden.

George and Amal skipped a romantic date night in favor of a dinner spent with a close (and famous!) friend. The couple was joined by Julia Roberts for a three-hour-long dinner at Claudette, a French restaurant in N.Y.C.'s Greenwich Village neighborhood.

On April 10, the couple spent the evening at midtown Manhattan's Harry Cipriani bar and restaurant, where they had drinks with Supreme Court Justice Sonia Sotomayor (who Amal worked for as a law clerk way back when) before sitting down to dinner. The venue's name made it a sentimental choice for the Clooney's: Venice's Hotel Cipriani was the site of their wedding celebrations last fall.

They're reportedly living on the Upper East Side, but it seems as if the West Village is George and Amal's go-to food hood. Most recently, Mrs. Clooney hit up celebrity hotspot Morandi, an Italian trattoria from famed New York City restauranteur Keith McNally, for lunch on April 7.

And the eating continues: On Friday night, the Clooney's headed down to the city's Greenwich Village to get back to their culinary roots – their wedding roots, that is. The couple, who were married in Venice last September, sampled the Italian offerings at Mario Batali's intimate eatery Babbo.

George and Amal were spotted hand-in-hand on one of their first New York City date nights leaving upscale sushi spot Kappo Masa on the Upper East Side.

Next up, the couple, along with George's mom, Nina, and three friends, went out for Italian at Midtown West's Patsy's, where George has been a patron his whole life – he even has a picture of his mother eating there when she was expecting him.

Not all of George's culinary exploits have been with Amal: The actor ventured to Queens for some authentic Greek cuisine with Bill Murray at Taverna Kyclades, where the two munched on stuffed grape leaves, chicken kebabs and caviar dip.

Amal's had her fair share of lunch dates, too! The British lawyer was spotted having a ladies' lunch with Vogue editor-in-chief Anna Wintour at The Lambs Club, an elegant American restaurant near Times Square.

But she's also been rubbing elbows with some of fashion's finest: She met up with Italian fashion designer Giambattista Valli – clad head-to-toe in his designs – for a simple dinner at Midtown's The Monkey Bar.

The newlyweds had another date night on the Upper East Side, the neighborhood where they're reportedly staying while in N.Y.C., dining on black truffles at chic French favorite Café Boulud.

Following that meal, George and Amal stopped by the swank Bemelmans Bar at the Carlyle Hotel, and were reportedly joined for a drink by a notable guest: former Beatle Paul McCartney.

To truly get a feel for the N.Y.C. restaurant scene, the stars had to experience some rejection. And as any New Yorker will tell you, sometimes a restaurant is just so hot that there are simply no tables left. According to The Independent, the couple tried to dine at Greenwich Village restaurant Carbone, but were turned away. Don't feel too bad for them, though: they reportedly scored two seats a few days later. 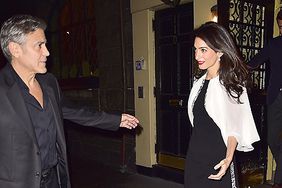 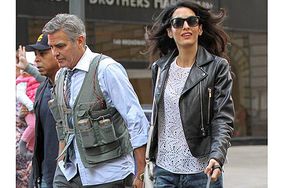 Amal Visits George Clooney On Set with His Pups (See the Pics!)