Anne Burrell is off the market!

In an exclusive interview with PEOPLE ahead of her wedding, Burrell, 52, opened up about finally tying the knot after getting engaged in April 2020 while quarantining with her family and Claxton in Cazenovia.

"I can't believe it's really here. It's kind of surreal," she says. "We feel so much love and support from everyone who's coming."

Burrell arrived down the aisle in a horse and carriage and was accompanied at the altar by four bridesmaids including her sister, Jane, and close friend, celebrity chef Rachael Ray. Claxton's best man was his son Javier, 16, from a previous marriage. (Burrell has never been married but was previously engaged to fellow chef Koren Grieveson in 2012.)

"I don't care about the cheese factor. Every time I mention the horse and carriage Stuart laughs a little bit," Burrell told PEOPLE before the wedding, "and I'm like, 'Alright, whatever. It's my moment and I mean to have it.' "

Burrell's wedding dress was made by Carolina Herrera and was actually the first gown she tried on. "I've loved Carolina Herrera forever because I feel like she knows how to dress real women," she says. "You don't have to be a stick figure, which I'm clearly not, but it still makes you feel beautiful and dreamy."

Claxton, 50, who works in ad sales marketing at Univision, looked dapper in a black tuxedo by Ralph Lauren Purple Label and orange Nike high-tops. "I wanted it to be fun, and have a sense of whimsy," Burrell says of the sneaker choice.

Guests, including stars Alex Guarnaschelli, Marc Murphy, Jeff Mauro, and Jenni "J Woww" Farley, were served a menu that Burrell personally perfected over many months. "The caterers, I'm sure, I've driven absolutely bonkers," she says with a laugh. "They gave me a bunch of suggestions for menu ideas, and I was like, 'Hmm, no. Hmm, no.' I felt bad, but I was like, 'I'm sorry, I'm a chef.' "

"But we've arrived. We have a meeting of the minds," she adds of the menu, which celebrates all the flavors of fall and its seasonal vegetables.

The starter was a roasted cauliflower steak with cauliflower puree, crispy potato shoestrings with creme fraiche, and caviar. The pasta course was a goat cheese and pumpkin ravioli in a sage butter sauce, with frizzled brussels sprouts leaves, toasted pumpkin seeds, and pumpkin seed oil. For the entree, they chose a duo plate of braised short ribs with a celery root and parsnip puree, and herb and potato crusted halibut on a bed of spaghetti squash, with Tuscan kale and pistachio pesto.

The tablescapes continued with the autumnal theme, decorated with vegetables, herbs, and colorful leaves, as did the multi-tiered wedding cake created by Cake Boss's Buddy Valastro.

"We had talked about a carrot cake, and Buddy was like, 'Eh, that's good, but what about a zucchini cake?' " says Burrell. "So we're doing a zucchini cake for one flavor, and then the other flavor is olive oil, lemon, and rosemary."

Following dinner, Burrell and Claxton kicked off the party with their first dance to "On Top of the World" by Imagine Dragons. "We have been going to dance classes and we had a Broadway choreographer choreograph a dance for us. So we've been practicing like crazy so we don't look like a couple of knuckleheads," says the Worst Cooks in America star, who worked with wedding planner Megan Hiltbrand of MLH Events to bring her vision to life.

At the end of their number, a balloon drop signified to guests to get up and start the "rip-roaring party," says Burrell.

After the wedding, Burrell and Claxton, who met on the dating app Bumble in 2018, will forgo a traditional honeymoon and head back to their recently renovated apartment in Brooklyn.

"The thought of having a wedding up here, then getting home, turning around and going somewhere else is just so overwhelming to me," says Burrell. "So I'm very happy to just have some home time, and enjoy newlywed bliss at home for a little while." 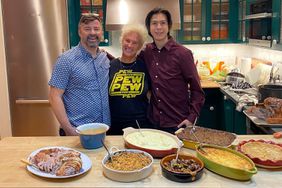 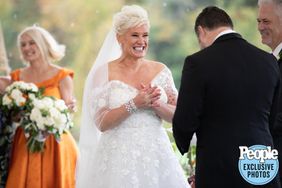 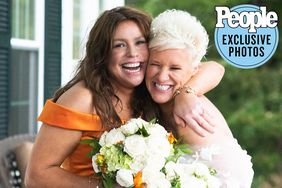