"[Twitter] is a chance for people to see a lighter side of my personality," says the two-time Super Bowl champion

It's been a year since former New York Giants quarterback Eli Manning stepped away from the NFL after 16 years in the NFL, but his rookie retirement year hasn't gone exactly as he planned.

"It's been a crazy year for everyone but I've been having fun being with the family and spending more time with my kids," says Manning, who has been married to his wife Abby since 2008, and has four children, Ava, 9, Lucy, 7, Caroline, 6, and Charlie, 23 months.

The two-time Super Bowl champion also recently joined Twitter, a space he uses to share his musings on life with the kids, poke some fun at his brothers and former league-mates, reveal his culinary adventures, and drum up enthusiasm for his post-football projects—including his current partnership with Frank's RedHot sauce.

As part of the brand's The Big Pour campaign, Manning is asking fans to help him get 100,000 tweets using the #FranksBigPour hashtag before Super Bowl 55 kicks off on Feb. 7. If he reaches his goal by game day, he promises to pour 100,000 gallons of Frank's sauce on TikTok star David Dobrik's head—live on social media. Also, $100,000 will be given to Tackle Kids Cancer, which helps raise money for pediatric cancer research and patient care programs at Children's Cancer Institute at Hackensack UMC.

Below, Manning (virtually) sat down with PEOPLE to chat about everything from his viral sloppy joes and his Super Bowl predictions to his family life and his fiery hot sauce throwdown.

You joined Twitter in May 2020. Why did you finally decide to get on social media?
I stayed away from social media for so long because I saw so many times where people got in trouble. So that was my ultimate goal: I didn't want to get in trouble. Frank's RedHot is the one who actually brought me to Twitter in the first place, so I could Tweet about The Match golf game during the pandemic, when [my brother] Peyton and Tom Brady were playing with Tiger Woods and Phil Mickelson. That was my introduction to jump in full throttle to Tweet my thoughts and observations during the match. And I enjoyed it—so after that, I just kept it going.

I have the mindset where I don't want to say anything negative, I don't want to attack anybody, I don't want to be super serious with it. It is a way to still stay in touch with fans and with the outside world. It's also a chance for people to see a lighter side of my personality. And now that I'm retired from football, I don't have to be so reserved and I can let people into my world a little bit. I always tried to keep that off limits for a long time, so it's nice to post light-hearted photos, like of me goofing around with the kids. I'm still learning the ins and out of it, but it's a fun way to follow the world and let fans see what's going on with me.

Within a few months of being on Twitter, you found yourself in the midst of a viral sloppy joe sandwich moment. Were you surprised by that?
I had no idea that would happen. I grew up in New Orleans and a sloppy joe to me was a tomato-saucy ground meat thing that you put into a bun. So I put up a harmless little Tweet and photo about a sloppy joe and the New Jersey world freaked out. They were saying, "That's not a sloppy joe! You live in New Jersey, you gotta have one of these New Jersey-style sloppy joes." [Ed note: A New Jersey-style sloppy joe is double-decker deli sandwich on rye bread, often stuffed with two types of meats (like roast turkey and corned beef or pastrami), Swiss cheese, coleslaw and Russian dressing.]

It just blew people's minds that there are multiple versions of sloppy joes, that a certain state calls it something else. It was funny to see the reactions on Twitter and on text messages from some buddies. I live in New Jersey now, and the amount of the local New Jersey delis that were reaching out and saying, "Hey, you have to come try our sloppy joe!" was crazy. And sloppy joes started showing up at my doorstep and at places they knew I might be. You know, it was pretty amazing and a funny sequence of events. I think there's room in this world for all kinds of sloppy joes.

Speaking of food, have you been spending more time in the kitchen since retirement?
I have dabbled in cooking a little bit more than I used to during quarantine—helping my wife with some of our family dinners. But for whatever reason, I get put on clean up more than the actual cooking. Maybe it's just my abilities or that I get in the way. I definitely have more time now that I'm retired to try different activities and do new things—and a lot of it involves being around my kids and being around their activities. I'm coaching three different basketball leagues as we speak, one for each kid. People used to ask me if I would get into coaching once I was done with football. I said "yes," but I don't think they knew I was talking about kindergarten through fourth grade girls' basketball.

Turning to The Big Pour hot sauce challenge, was it your idea to pour hundreds of gallons of hot sauce on someone else's head?
I think the whole thing came from a series of Frank's commercials I did, which were about how I literally pour that sh*t on everything. We said, 'What's the most extreme thing we can do?' And it was like, 'How about I just pour a ton of Frank's RedHot on a person?' and so it was really of a matter of who was going to be willing to get sauce poured all over them. We obviously wanted to have a fun challenge and also have a charitable initiative associated with it. So David was the guinea pig, and took the bait and accepted the challenge. I think it's a fun challenge. Hopefully we can get 100,000 tweets and accomplish our goal because I really want to pour hot sauce on his head.

Was there ever talk of someone pouring hot sauce on you?
There was a little talk of that, but I was excited when David accepted because I just figured it was a seniority deal. I'm the older guy, so I get to do the pouring. It's how it always was with my older brothers—they got to pick on the younger, littler brother. I never had a younger brother so David gets to fill that role for a day. Luckily, Frank's is not too hot—it's approachably hot—so it shouldn't burn him. He'll hopefully have some wings or food in there with him so maybe he can get a little snack while he's having gallons of hot sauce poured on him.

It's like the hot-sauce version of being slimed on Nickelodeon. Somewhat related, did you watch the NFL game when it was broadcast on Nick?
I did not watch it on Nickelodeon, but I saw a few clips and saw a few of things that were going on and I thought it was a great idea. I probably should have jumped on it and got some of my young girls to watch it that way. It might have got them sit down and actually watch the game for more than 10 minutes. If they do it on Nick again, I'll definitely jump on it and get my kids, who aren't really into football yet, on board because I think they would be interested in learning more about the game if it's more entertaining to them.

As someone who has played against—and defeated Tom Brady—in two Super Bowls, you've got a perspective very few others do. What do you think about the matchup between Brady and Patrick Mahomes—and any predictions?
It's just a great story: Tom Brady changing teams after 20 years, going to new a team, and still getting the same results and getting back to a Super Bowl at the age of 43. It's just so impressive—especially for him to have made those adjustments during a shortened offseason and during a pandemic. It's two great teams that are playing really well right now and it should be a great game to watch.

As for predictions, it's tough. I think Patrick Mahomes and Kansas City are just really good on offense. They find ways to make plays at the critical moments. They're going to be a tough team to beat. But that's the great thing about sports, you never know. Predictions don't mean anything because it's all about what happens on the field on that day. I think it will be a tight game, and it's going to come down to who makes the big plays late in the fourth quarter to win the game.

UPDATE: On Feb. 4, Eli Manning and David Dobrik received over 100,000 Tweets to complete the Big Pour challenge. As promised, Manning—speaking to Dobrik through virtual screens and using a remote control to flip a large Frank's RedHot bottle over his head—sprayed gallons of hot sauce on the TikTok star's head. The former Giants star documented the moment on his Twitter; see the full video above. 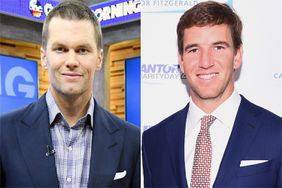