After the release of the Doritos Locos Tacos, well ... things escalated quickly

The fast food chain is stepping up their nacho game. Two new nacho boxes are being tested at the Manhattan Cantina restaurant: the Chicken Enchilada Nachos Box and the Steak and Cheddar Nachos Box. They're also testing a Buffalo Chicken Nachos Box in Charlotte, North Carolina and the Cheesy Jalapeño Nachos Box in Milwaukee, Wisconsin. If enough people are into the $5 boxes, they could expand to locations nationwide.

After the smashing success of their nacho fries, the chain is now testing out two new varities at certain locations in Ohio. The new Rattlesnake Fries are made with grilled steak, jalapeño sauce and nacho cheese, while the Reaper Fries are served with ranch dressing infused with Carolina Reapers—the world's hottest chile pepper.

Dayton, Ohio residents are in for a breakfast treat. Taco Bell announced in April that they are testing a new chalupa made with a French toast shell at locations in the midwest city. The sweet new addition to the menu, which sells for $2.49, also features scrambled eggs, bacon or sausage crumbles and a side of syrup.

Taco Bell wants you to get a whole lot more bang for your buck by introducing the $1 triple melt burrito and $1 triple melt nachos. Both new items, which are available nationwide starting April 5, are made up of their seasoned beef, shredded three-cheese blend and nacho cheese. The chain is also bringing back the beefy crunch burrito for $1 in Chattanooga, Tenn. locations as part of a test, as well as the $1 crispy chicken taco being tested in Oklahoma City restaurants before possibly going nationwide in 2019.

Starting in May, Taco Bell will be stocking grocery store shelves with tortilla chips inspired by the flavors of their iconic sauces. Available in Classic, Mild and Fire, the bags will be easily recognizable to fans of the fast food chain because the design is nearly identical to that of the sauce packets (and yes, still include little words of wisdom).

After being tested in West Virginia and California locations last spring, the fast food chain is finally adding fries to their nationwide menu on January 25. The crispy new additions will be covered in "bold Mexican seasoning" and served with a side of nacho cheese for dipping, according to a press release. The standard size will cost only $1, but hungry fans can upgrade to the Supreme for $2.49 or Bell Grande for $3.49, which comes topped with beef, pico de gallo, sour cream and more nacho cheese.

The Mexican-style fast food chain is making a French fry-filled burrito that may either thrill or horrify West Coast natives. The new menu item, which reportedly originated in San Diego, comes packed with beef, nacho cheese, guacamole, sour cream and plenty of crispy fries. Not everyone will get a taste of it just yet, though—the burrito is only available in one lucky location in Charleston, West Virginia where it's being tested.

Taco Bell is diving into dessert territory and teamed up with Kit Kat to create the ultimate "fourth meal." For $1, customers in Milwaukee can enjoy a grilled flour tortilla stuffed with Kit Kat bars. There are reports a Twix version also exists.

From now until Sept. 21, customers dining at Taco Bell's Orange County location can try their newest creations: the Forbidden Bowl and Forbidden Burrito. Both items include "forbidden" black rice, crispy avocados and a new sauce, topped with your favorite protein and fresh veggies. The price for each varies between $3.49 and $3.99 depending on choice of protien or you can go all out and get it as part of the $5 box deal which also includes a Doritos Locos Taco, a Crunchy Taco and a medium drink.

Following the success of the Naked Chicken Chalupa, Taco Bell has added another "naked" item to their breakfast menu nationwide starting August 31. For $1.99, customers get potato bites, cheese, and bacon or sausage all wrapped in a fried egg "shell".

Perhaps the most bizarre item to hit the Taco Bell menu thus far, this burrito features the usual rice, beef and cheese and red tortilla strips wrapped in a red tortilla — but it also comes with the option of adding cayenne "popping crystals" for an extra 20 cents. The sensation is similar to the popular Pop Rocks candy, causing a fizzy feeling in your mouth. Order it cheesy or spicy (loaded with chipotle sauce). For now, the rock candy is only available at four Taco Bell stores while in testing.

Because potatoes add joy to everything, Taco Bell stuffed them into a new burrito for only $1. For a limited time only, customers can indulge in the new creation, which features a flour tortilla filled with seasoned beef, nacho cheese, their famous potatoes and chipotle sauce.

Why have a regular Chalupa when you can have something even bigger? Taco Bell answered this question with a double wide shell stuffed with — you guessed it — double the amount of beef, lettuce, sour cream, cheese and tomatoes. The mouthful of a creation will be available to customers through the end of July.

After the short-lived Naked Chicken Chalupa made waves across the nation, the chain introduced a new innovation in fried poultry on May 2. This time, the triangular-shaped "chips" are made entirely of crispy chicken—perfect for dipping in their signature nacho cheese sauce.

After being tested in select locations for months, the first taco shell to be made entirely of fried chicken is finally available nationwide, starting Jan. 26 for $2.99. The "un-shelled" menu item was hit among PEOPLE staffers: "I will eat one every day of my life going forward," said one happy tester.

Taco Bell revitalized every '90s kids favorite mystery by turning the white Airhead flavor into a sugary drink last September. Customers can sip on a 16 oz. slushie for $1.99 until they've either guessed the flavor or suffered a serious brain freeze — whichever comes first.

Starting in August, the fast food chain began testing exactly what it sounds like: a burrito with literal Cheetos stuffed inside of it. For only $1, we can't see why this glorious creation won't make it into stores nationwide in no time.

After its release in March, PEOPLE Staffers declared the insanely cheap breakfast menu to be "one of the best things that happened to us this year, maybe ever." The deal now includes eight items like the sausage flatbread quesadilla, mini skillet bowl, breakfast soft taco and hash browns.

The mashup, which joined the menu last Februray, is made of a chalupa and a quesadilla, featuring all the classic chalupa fixings of beef, lettuce, tomato, sour cream, and cheddar cheese — with the added bonus of having a shell stuffed with melted pepper jack cheese.

Ahead of the aforementioned biscuit taco came this sweet and savory breakfast combo made of a round, fried waffle wrapped around a sausage patty or bacon, with scrambled eggs, cheese and syrup on the side.

Behold, the hybrid that started it all. The taco made out of Doritos tortilla chips originated in 2012 and now comes in nacho, fiery or cool ranch flavors and is available in the standard or supreme size. 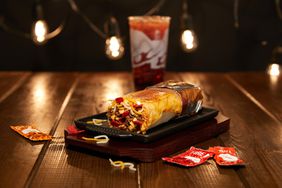 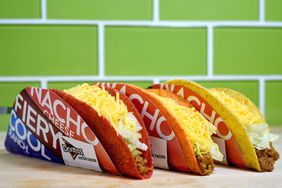 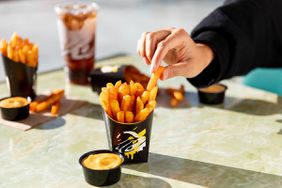 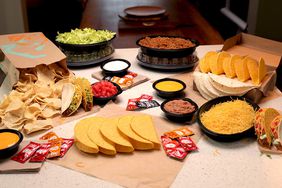 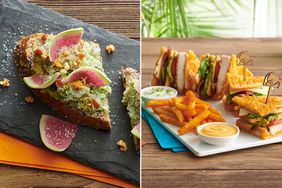 What Will the Food 'Really' Be Like at the Taco Bell Resort? The Executive Chef Tells All 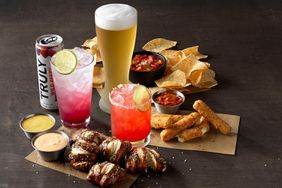 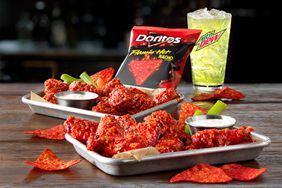 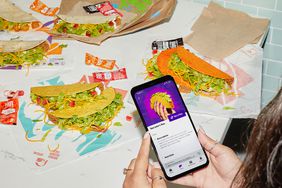