Chalamet posted a bunch of behind-the-scenes photos from the filming of Little Women including this one of the cast and director enjoying some Wendy's fries in between takes. It all started when Streep had a fast food craving.

"I remember it was cold and she was like, 'Oh I would just kill for some fries right now,' " Pugh said of the moment. "And within seconds, there was a [production assistant] that was out of breath … and they had grabbed Wendy's fries in about 10 minutes."

The Wests took North and Saint to The Cheesecake Factory not just once, but twice in a row. Their cheesecake of choice? The chain's Fresh Strawberry Cheesecake!

The extremely good looking family went to IHOP for breakfast and "ordered every picture on the menu."

Ba-da-ba-ba-ba, Cardi B's loving it. The rapper knows there's nothing better than some McDonald's after a night on the town.

For Witherspoon and Kroll it's In-N-Out or bust.

A trip to a Waffle House in formal attire sounds like the ideal double date, TBH.

Kourtney and Khloé were Popeyes fans even before their chicken sandwich went viral.

The journalist and her nephew Cameron Harrison tried 15 different Popeyes locations looking for that famous chicken sandwich, but ultimately had no luck!

The rapper took Jimmy Fallon to Olive Garden because, as we all know: When you're there, you're family.

Katy Perry celebrated her 31st birthday at the Olive Garden saying, "When you could go anywhere for your bday dinner but you're so OG that you go to OG with all your OG's." Gotta get those breadsticks!

The Tony award-winning singer channeled her American side in London, stopping in and enjoying a meal at a McDonald's. Holding up a crispy fry, her plate is full with a burger, soft drink, dipping sauces and plenty more fries. "Just an American girl at dinner in London..." she wrote in her Instagram post.

In a video for Vogue's 73 Questions series, the newly-married model revealed her "guilty pleasure" is Shake Shack. She's such a fan of the burger chain that she also told the magazine that if she could solve any mystery it'd be what's in "Shake Shack's special sauce." The restaurant is determined to keep that a secret, but she could recreate something very similar with the recipe they shared in the Shake Shack cookbook here.

The actor and the Playboy model, who were first spotted together grabbing dinner at the high-end Japanese restaurant Nobu Malibu in 2018, went decidedly more mainstream for another meal when they were seen swinging by a Jack in The Box drive-thru in Santa Monica. Affleck placed their order at the fast food restaurant in the driver's seat, while Sexton was all smiles next to him.

After welcoming their newborn son Crew in 2018, the HGTV stars stopped by Schlotsky's, a chain that serves sandwiches and pizzas, in their hometown of Waco, Texas. Their order: meat and cheese sandwiches for their kids. Amber Warren, the employee who snapped this cute selfie with the couple, told PEOPLE that Joanna said the Gaines kids take after Chip and prefer their "food plain."

While the singer was on the road for her Piece of Me tour, her diet consisted of all "chicken and veggies that's it" — plus the occasional fast food run, she told ET. "I have the small burgers from McDonald's," she said. "The happy meal!"

The actor and Morgan Brown satisfied their In-N-Out cravings in L.A.

The model shared a photo of herself barefoot in a Del Taco following her husband John Legend's rosé wine launch party in L.A. in 2018. "2 chicken soft tacos, extra del scorcho," she wrote on Instagram.

The two visited a McDonald's drive-thru in L.A. for quick lunch. Kardashian was seen munching on a french fry as a shirtless Thompson pulled away from the fast food restaurant. Fun fact: Kardashian revealed that the first food she ate after giving birth to her daughter True Thompson was a McDonald's hashbrown.

When the actor appeared on Letterman's Netflix show My Next Guest Needs No Introduction with David Letterman, the duo met up outside a classic L.A. hot spot: In-N-Out. While watching planes take off from LAX, Clooney joked he'd do "anything to get out of the house" after having twins. The stars snacked on burgers, fries and chocolate milkshakes, which were brought out by one lucky In-N-Out employee. "I noticed you didn't dig down to give the guy a gratuity," Letterman joked to Clooney.

When Mickey D's offered various sizes of their iconic Big Mac, the retired footballer and his youngest son had no choice but to try them all. Haven't you heard of the Goldilocks principle? "WOW 😂😜 me and dad can't decide what to eat first," joked Cruz.

The Riverdale star isn't shy about her love for Domino's, often posting about it while watching the hit show. "Brb ordering Dominos now," she tweeted with a gif of one of the show's characters holding a stack of pizza boxes.

"Malaysia, this just happened," the former Pussycat Doll said on her Instagram story after rolling up to a KFC with a police escort. The star got her fried chicken fix still dressed in her sequin jumpsuit hours after performing for the Royal Family at a wedding in Singapore. Once she thanked the police for their help, Scherzinger wasted no time digging into her takeout in the backseat.

The Bachelorette host took a trip to In-N-Out with his "Hollywood crew," Taylor and Joshua, to celebrate after a big season finale.

It's no secret that the KarJenners' go-to private jet fuel is Popeye's fried chicken.

What she order? Not the fish fillet! "When in Japan" with her McDonald's-loving husband, Kanye West, the reality star stopped by the fast food chain for her go-to treat. "No I did not order a fish fillet, I always get a hot apple pie," she said on Snapchat.

"When u in tennessee and the police escort take u from stage to sonic," the singer tweeted after performing at the Bonnaroo Music & Arts Festival. Earlier in the night, Lorde reportedly took slush flavor suggestions from the audience, and according to the color of her tongue, it looks like she decided on either the blue coconut, blue raspberry or Powerade Mountain Berry Blast.

Before heading back to Atlanta, the former RHOA star grabbed food from the West Coast chain In-N-Out Burger while traveling through LAX airport. A Double-Double sure beats airplane food!

During their visit to N.Y.C., Grimaldi (a Canadian native) introduced the former Bachelor to doughnuts and coffee from Tim Hortons.

The Mindy Project star is not shy about her McDonald's obsession, which she believes stems from her overly-healthy upbringing. "Best goodie bag in history," she wrote of this spread of Happy Meals and Shamrock Shakes at her show's wrap party.

The singer has been spotted hitting up the Jack in the Box drive through on multiple occasions, and the "cake" for her 21st birthday was a platter of the chain's famous vegetarian tacos.

Teigen has a well-documented love of Dorito dust, so this massive pile of Doritos Locos tacos from Taco Bell that she ordered on set of FabLife Show is very on-brand.

The pop star celebrated his three People's Choice Award wins in 2014 the way we all would — with a trip to Taco Bell, where he took fun photos with the staff.

The Pretty Little Liars star's love of pizza runs deep, so it's no surprise she fell hard for this heart-shaped pizza from Domino's

The Barbados native had a "taste of home" with some chicken nuggets at the island's regional fast food chain, Chefette.

Eating In-N-Out burger post-awards shows is a time-honored celebrity tradition, and the Room actress did not break tradition after taking home her Academy Award in 2016. 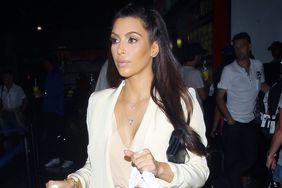 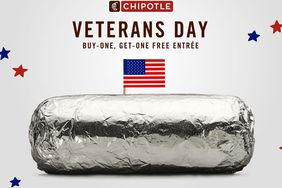 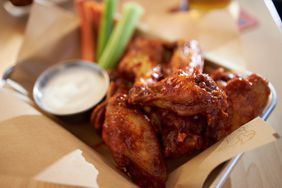