All the Celebrities Who Have Fallen in Love with Chefs

They say the way to someone's heart is through their stomach.

After being first spotted together last November, the I Feel Pretty star wed the chef during a private wedding ceremony on Feb. 13. Fischer is not only a seasoned chef, but an award-winning cookbook author and owner of his family's Beetlebung Farm on Martha's Vineyard.

The singer and daughter of Billy Joel and Christie Brinkley announced her engagement to the restaurateur with an Instagram post on Monday. Gleason is involved with two New York City restaurants, Drexler’s and Boulton and Watt, and Joel seems happy to join him on work trips to wineries and breweries.

The couple may have met on the set of Legend's music video, but their love really shines in the kitchen, where Teigen is always whipping up new recipes for her hubby of four years.

The host of NBC's The Voice married the food blogger, who regularly appears on Today, in 2015. They have three kids together.

Since rekindling their romance after dating years ago, the Live with Kelly and Ryan host and the chef, who posts her recipes on Instagram, now live together in New York City.

The Call Me by Your Name actor and the owner of BIRD Bakery wed in 2010 and have two children together. One of Chambers' go-to dinners to make for her family is a roast chicken stuffed with fresh herbs. Get the recipe HERE.

The Parts Unkown host often gushes about the actress, telling PEOPLE: "She’s a really accomplished director and writer along with being a longtime actress and a real sponge for culture, music, literature. So she’s enormously helpful and inspiring."

The actor says it was love at first sight when he first met the model turned chef: "The self-respect she had, the way I understood her and her relationship with family, the way she respected me but never took anything for granted, not putting on any airs whatsoever,” he told PEOPLE. "We went on our first date three nights later and I knew then I’ve been wanting to go on a date with her for the last nine years and not with anybody else."

The actress, who is best known for her role on The Office, married the actor turned baker in 2016 and they now have their own YouTube series called Baking with Josh & Ange.

After getting married in Spain in 2013, the couple welcomed their second son, making them a family of four. Though she's since mastered a few of her own skills in the kitchen, Price said it took some getting used to having a professional chef around. "At first I was really intimidated," she told PEOPLE. "He can chop an onion without even looking! There are times I've messed up hard-boiling an egg." 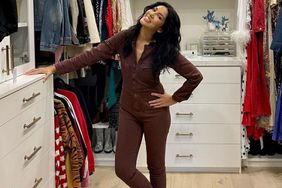 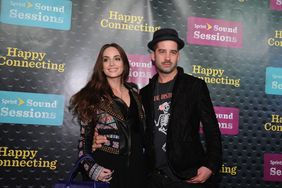