"Could not smile and laugh more in a 12 month span," Flay said of his relationship with Yorke

Bobby Flay has had a year filled with love.

The celebrity chef, who finalized his divorce from Stephanie March in July 2015 after 10 years of marriage, celebrated his one year anniversary with girlfriend, actress Heléne Yorke, on Saturday. “One year later … could not smile and laugh more in a 12 month span,” Flay, 52, wrote on a selfie of the pair. “#happyanniversary.”

The 31-year-old Canadian actress also commemorated the milestone by sharing a photo with Flay and his cat, Nacho. “365 days of Ginger,” she wrote. “Got me a bigger heart now.” Yorke is known for her roles in Quantico, High Maintenance, and as Jane Martin in Masters of Sex.

The duo’s time together has naturally been filled with plenty of food. Yorke even started an Instagram account, @thehungriestgirlfriend, dedicated to their culinary adventures. “I’m dating a chef. I’m still hungry,” reads her bio. Their dozens of outings include restaurants like Cafe de la Esquina in Williamsburg, Michael Symon’s Mabel’s BBQ in Cleveland and Flay’s own Bobby’s Burger Palace.

Sporting events are often frequent date nights for the pair who rang in the New Year in Miami for University of Michigan’s (Yorke’s alma mater) Orange Bowl game. They also celebrated a win together at the Belmont Stakes in June.

In addition to gushing over each other on social media, Flay has shown his support for Yorke’s various project, most recently accompanying her to the premiere of Epix’s Graves. And the couple have joined forces professionally, starring together in Extra Crispy‘s video, Bobby Flay vs. Bobby Flay: Breakfast Battle of the Century. Yorke acts as a “celebrity judge” forced to choose between two Bobby Flays.

The happy relationship comes after Flay was reportedly “heartbroken” over his split from March. “There’s still a lot of love there and no one makes Stephanie laugh more than Bobby,” a source told PEOPLE in 2015, “so this was hard for both of them.” 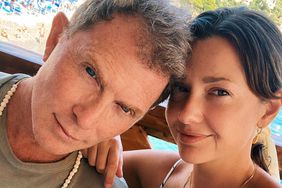