Bobby Flay and Giada De Laurentiis have teamed up for something delicious.

The two old friends have a food and travel show premiering on the new streaming service Discovery+ on January 4, 2021. Bobby and Giada in Italy follows the pair as they cook and eat their way through De Laurentiis' home country.

"Exciting news....All your favorite shows, including a new series ‘Bobby and Giada in Italy,’ are coming to #discoveryplus on January 4th! Follow @discoveryplus to stay in the loop on what’s coming… it’s gonna be good," said Flay, 55, on his Instagram announcement.

The new streaming service from Discovery launches on January 4 as well. Along with original content, Discovery+ will stream television shows from Food Network, HGTV, TLC, and more for $4.99 per month.

De Laurentiis, 50, and Flay were first spotted in Rome filming the project back in September 2019. Flay first teased the trip with an Instagram story aboard a flight: “On my to one of my favorite places,” he wrote. When he arrived, Flay made sure to stop by hot spots like Piazza Navona, Campo de’ Fiori, and the Spanish Steps.

De Laurentiis was equally excited about visiting the city where she was born, kicking things off with a photo of herself jumping in the streets. “There’s no place like ROME ❤️,” she said.

At the time, De Laurentiis had been giving her fans glimpses into the secret project on her Instagram stories. At one point she shared a video of her gorgeous floral wardrobe getting steamed, and then followed up with a clip of herself wearing it on set. 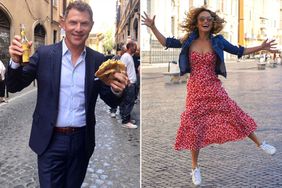 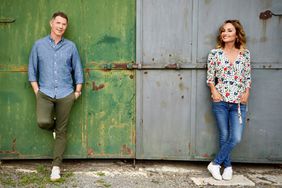