After 26 years of sobriety, the Bizarre Foods host still says it's a "constant process."

Andrew Zimmern has discussed his struggle with with drug addiction and alcoholism in the past, and now he’s opening up about what led him down his path of self-destruction.

In an interview with PEOPLE Now on Wednesday morning, the Bizarre Foods host recalls a pivotal moment during his adolescence. “When I was 13, I came back from summer camp—summer of ’74—and my mother had had an accident during surgery and was in an oxygen tent in a coma. It was so traumatic. My parents had been divorced for six or seven years at that point, and it was sort of the seminal event of my life,” he says. “The only other ones that come close were sobering up and then starting a family. That [first] one being the biggest because it set me on a path to crash and burn in a very, very, very even more deeply traumatic way.”

His mother ultimately recovered and was in and out of mental hospitals before passing away in 2011, according to CNN. But Zimmern was already on a dangerous path, turning to drugs and alcohol throughout his teens and early 20s. “I was functional—I graduated high school; I was functional—I graduated college,” he says, noting that he was suspended three times and had stints in jail and in the hospital while attending Vassar College.

Andrew Zimmern Tells the Story Behind His Selfie with Charlize Theron

After graduating, he says his problems only escalated. “Post-college, the stories weren’t ‘Oh, you were so funny last night,’ it was like ‘Oh my God, you can’t do that.’ And then you start to lose people.”

Eventually, the Travel Channel star ended up homeless and squatting in an abandoned building in lower Manhattan and stealing to pay for his drug habit—until one day he realized he had to make a change. “I stole some jewelry from my Godmother; I hawked it. I put the $200 down for a room for a month at a flophouse hotel[…]and I tried to drink myself to death. And it didn’t work. I came out of a black out days later, and for the first time in my life I didn’t have that Ace bandage of anxiety and tension around my chest. I did something that I hadn’t done in 15 years which is reach out to somebody to ask for help[…]Four days later, I had a one-way ticket to a treatment center in Minnesota.”

Now, the chef still resides in Minnesota with his wife, Rishia Haas, and their son, Noah—and is nearly 26 years sober. “My life gets better every year,” says Zimmern. “It is a daily deal. Am I a little further away from a drink today, at 26 years, than I was at one year? Yes, because I do the things that I need to do to keep myself safe and sane. But it’s a constant process.”

The new season of Bizarre Foods premieres on Tuesday, January 23 at 9 p.m. ET on Travel Channel. 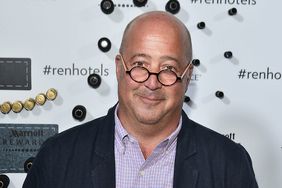 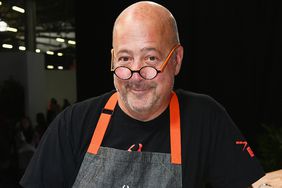 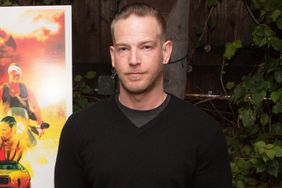 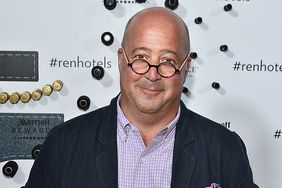 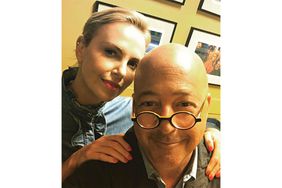 Andrew Zimmern Tells the Story Behind His Selfie with Charlize Theron: 'Did That Really Just Happen?' 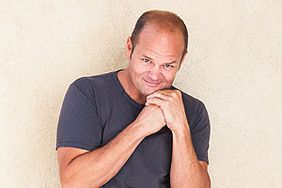