On his new Food Network series Camp Cutthroat, premiering Wednesday night, Brown continues his role of host and instigator of culinary “sabotages” that he’s become know for on Cutthroat Kitchen (though this time, he’s dressed in full scoutmaster garb).

This is just the latest of many Food Network endeavors for Brown, who has been with the network since 1999 and has certainly seen the landscape of culinary television change over the years — specifically trending toward competition shows.

“Once Food Network moved out of being an emerging network into a full-fledged television network, it had to fight for the same number of eyeballs as everybody else did,” he tells PEOPLE.

“And that, by and large, in the last decade of our media generation, has been competition. That’s what most people want to watch,” Brown says.

With specific regard to perhaps the network’s most vocal critic, Anthony Bourdain, Brown says: “I don’t have to defend my skills against anybody. I’ve got 14 years and 252 episodes of a show called Good Eats that I’m pretty sure I can use as a résumé for my skills.”

He continues: “When was the last time you saw Anthony Bourdain actually cook anything?” adding, “I’ve spent 14 years cooking my own food on television and I’ve never seen him cook a meal.”

Brown does, however, have some notes of praise for the traveling foodie.

“I will say this: I think that [he] is probably the best writer about food. I’m jealous of his work,” he says. “He pokes a lot of things and that’s fine; you have to have critics, issue provocateurs, so to speak […] I’m a fan, and the few times I’ve gotten to work with him I enjoyed it immensely.”

RELATED: Anthony Bourdain: ‘Ina Garten Is One of the Few People on Food Network Who Can Actually Cook’

And, speaking of Good Eats, might fans expect acomeback? There could be hope after all.

“The main thing I see on social media every day is people telling me to bring that show back,” Brown says. “I’m gonna bring something back that would be like Good Eats, but for digital.”

The Internet will be (impatiently) waiting, we’re sure.

Anthony Bourdain: 'Ina Garten Is One of the Few People on Food Network Who Can Actually Cook'

EXCLUSIVE: Watch Neil Patrick Harris and David Burtka Get in the Kitchen with Ina Garten

Alex Guarnaschelli: What It's Really Like to Be on a Cooking Competition Show 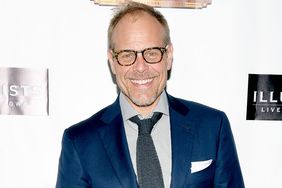