A woman led her alleged kidnapper straight to the police in a strange case in Las Vegas, leading to the man’s arrest.

Gary Walker, 55, reportedly walked into the Regional Justice Center in downtown Las Vegas on Wednesday morning with a woman who “told Marshals that she had been kidnapped and sexually assaulted,” a police statement said, according to NBC News.

The woman, who has not been identified, reportedly told sex crimes detectives that she had been assaulted by Walker at a home on the east side of town, the same location where she told detectives that Walker had also murdered another woman.

Homicide detectives arrived at the residence to find the remains of the murdered woman in a suitcase inside a kitchen closet, NBC reported.

Walker was arrested and booked into the Clark County Detention Center on “suspicion of murder, kidnapping, assault with a deadly weapon and eight counts of sexual assault,” NBC reported.

The body of that woman has been identified as Morgan Briel Amaya, 22, the Clark County Coroner’s office told NBC 3. Amaya reportedly died from a gunshot wound to the head.

Amaya’s sister-in-law Nicole Marie told the outlet that she had been struggling with addiction and had been working to regain custody of her 1-year-old daughter.

Marie and her fiancé, Victor Hougesen, told NBC 3 that they had spoken to both Amaya and Walker just the day before and “everything was fine.”

“We just talked to her Tuesday; everything was fine, and I talked to the guy he seemed like he was cool,” Hougesen said.

The timeline of the anonymous woman’s assault and Amaya’s murder are not clear.

Walker is set to appear in court next on Monday, Fox 5 Vegas reported. 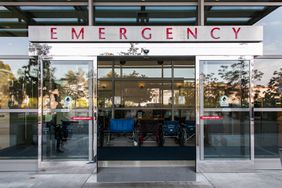