Chris Brown will be in a Los Angeles court later this month after allegedly assaulting a little-known actress with a gun in the early morning hours on Tuesday.

The woman, Baylee Curran, alleges that Brown threatened her with the weapon while she attended a party at his home. LAPD police officer Tony Im confirmed to PEOPLE that officers responded to a radio call of a female screaming at the home at 3:11 a.m. on Wednesday, and Brown was later arrested on suspicion of assault with a deadly weapon after a nine-hour standoff. The 27-year-old singer posted his $250,000 bail, and was released just after 11 p.m. that night.

After the incident, Curran told Extra that she was admiring some diamonds at Brown’s house when a man started shouting at her to get away from them.

“Chris came in, pulled out his gun and said, ‘I’m getting so sick of you people,’ pointed the gun at me, [and told me] to get the f— out of the house,” she claimed, explaining that she fled after being asked to sign a nondisclosure agreement.

Although Curran insists that she’s not speaking out for publicity, the model has had dealings with the authorities in the past, and has rubbed shoulders with some of Hollywood’s big names in her quest to make it as an actress. Here’s everything you need to know about Curran.

1. She’s wanted in connection with a grand larceny case
Curran has had previous brushes with the police – but on the other side of the law.

The New York Police department confirmed to PEOPLE that Curran is wanted in connection with a 2013 grand larceny incident at the famous New York City Plaza hotel.

Curran was vacationing at The Plaza with two friends when they got into an argument. Curran fled with one of the women, who had stolen a wallet filled with credit cards and $1,000 in cash from their other friend.

While there’s no warrant out for Curran, she can be taken in for questioning by police if she’s seen in New York City.

2. She was reportedly stripped of her pageant title
Although many of Curran’s social media photos show her proudly wearing a 2016 Miss California sash, pageant organizers told TMZ that the blonde beauty no longer holds the title.

Officials told TMZ that Curran allegedly repeatedly broke pageant rules, and her crown was removed just two months after she won the honor. Officials alleged, however, that the physical tiara has yet to be returned.

3. She’s an actress
Curran calls herself an actress in her Instagram profile, and the 25-year-old has the IMDB credits to prove it.

After starring in several shorts in 2012 and 2013, Curran had a part on short-lived drama series Viceroy, and later appeared in 2014 movie Broken Gardenias.

Her most recent credit is Cold Blooded, an upcoming thriller about a film crew stranded in the desert.

4. She rides horses
The Atlanta native is quite the equestrian, and often posts photos with horses.

5. She’s got some famous friends
The Brown incident wasn’t Curran’s first run-in with California’s famous residents. She’s posed for snaps with a slew of celebrities, including "friend" Corey Feldman, and Drew Barrymore, even visiting the Playboy Mansion with the former. 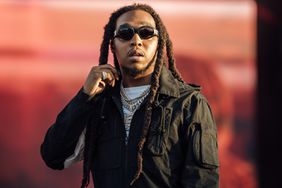