Less than four months after the star was arrested for allegedly trespassing on her ex Nico Fanjul’s property, Mortimer has signed a deal – meaning the case will not be going to trial.

Per the agreement Mortimer’s legal team struck with the district attorney’s office, no communication will be made, either directly or indirectly, between Mortimer and Fanjul, and Mortimer will stay away from Fanjul’s home as well as his parents’ home. The charges will be officially dismissed on Dec. 30.

Mortimer called authorities to Fanjul’s home in April and asked for a civil standby because she said she wanted to retrieve belongings from his home. Authorities informed her that she was trespassing on the property in regards to a previous trespass warning issued in October, and the star was placed under arrest.

“Tinsley has always maintained her innocence. She is relieved and feels she has been vindicated,” a source close to the star tells PEOPLE. “Now she can finally move on with her life. This is a victory for her.”

In fact, the insider says the ordeal “saved Tinsley’s life.”

“Now she can live a happy life, and she’s been taking the steps to do that,” says the source, who confirmed Mortimer has continued to seek counseling.

“Hopefully, one day she can help other women that have found themselves in similar situations and feel like they can’t get out,” says the source.

As PEOPLE previously reported, Mortimer and Fanjul had a volatile relationship and police reports have revealed incidents of alleged domestic violence between the two: In 2013, Mortimer was hospitalized for a head injury and two police reports from June 2014 revealed further altercations between the couple in which Fanjul allegedly smothered Mortimer with a pillow and pushed her head to the pavement.

Another police report obtained by PEOPLE from 2014 details another alleged incident of domestic violence between Mortimer and the sugar heir, which occurred on Mortimer’s birthday.

Earlier this month, a source told PEOPLE “Tinsley became so isolated during her relationship with Nico.”

“They would have these explosive fights and then he would apologize and it was an endless cycle,” said the source. “She was in denial. I think she believed he would change.”

According to the source, “counseling has been really helpful for Tinsley. She just wants to move on with her life.”

Mortimer was previously married to oil legacy Topper Mortimer and starred in her own CW reality show High Society in 2010. 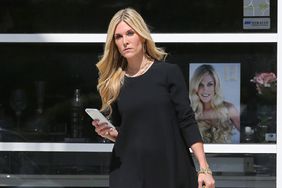