'The Scene Is a Horrific One': Eyewitnesses Recount Terror of El Paso Shooting That Killed 20

"I looked at my co-worker, and we looked at each other like shocked and scared," a Walmart employee said

A Walmart employee in El Paso, Texas, was on duty Saturday morning and heard what she initially believed was the routine sound of boxes being dropped.

But when the sounds got closer, a horrific reality dawned on her, said the woman, who spoke with NBC and identified herself only as Leslie, her first name.

“That’s when I looked at my co-worker, and we looked at each other like shocked and scared,” said Leslie.

She then sprang into action: “I got all the people that I could, I even found a little girl that was missing from her parents, and I got her, too. I tried to get as many people as I could out,” she said.

Twenty people were killed inside the Walmart and 26 more were injured, authorities said Saturday.

The lone suspect, 21-year-old Patrick Crusius, of Allen, Texas, surrendered without incident to police. The shooting is being investigated as a hate crime because of an apparent manifesto with white nationalist themes the suspect is believed to have written, said authorities.

Vanessa Saenz, who was shopping in the store, told ABC the shooter was wearing cargo pants and ear protectors. Saenz said she saw victims near the shooter who were cornered and then saw the shooter turn and fire on them.

In the aftermath of the tragedy, stories are emerging about people like Leslie who tried to help.

Glen Oakley was in a nearby sporting goods store when a child told him there was a shooter in Walmart. Initially, Oakley didn’t believe him, but then he heard gunshots, and noticed unaccompanied children in the parking lot around him, he told NBC.

“It was just a whole bunch of kids up in there,” said Oakley, who PEOPLE confirms is an Army Specialist.

He tried to pick up the children, but they were so nervous that they eluded his grasp. At the time, Oakley had a legally permitted weapon on him and he was stopped by police, but he was let go when he proved his weapon was legal.

Describing the store after the shooting, El Paso Police Chief Greg Allen said, “The scene is a horrific one unfortunately because of the nature of the situation.”

Gov. Greg Abbott said a “normal day for someone to leisurely go shopping turned into one of the most deadly days in the history of Texas.”

Jorge Salgado, a news reporter who was in the area, tells PEOPLE, “I did see people running out of the mall, some with their hands up, some people crying, some embracing. The mall was surrounded by law enforcement. I saw helicopters. I saw members of the swat team run in. I just saw chaos. And then law enforcement running in to try and help with the situation.” 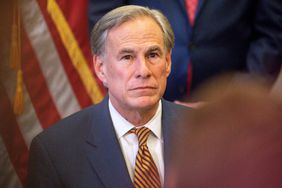