Emma Presler, 19, got murder charges against her dropped last year, but now she's wanted for a new crime that left one man dead and his wife critically injured

Earlier this month, a man and woman were doused with gasoline and set on fire in their Kingwood, Texas, home. Now, a teenage girl is wanted for murder in connection with the apparent targeted attack.

Devin Graham, 33, and Karissa Lindros, 26, were airlifted to an area hospital after escaping from the burning home on Aug. 6, according to a statement from the Houston Police Department.

Graham later died of his injuries, leaving behind three young children — two of which he shared with his wife, Lindros, according to a GoFundMe page.

Lindros remains in the hospital in critical condition, suffering burns on more than 70% of her body and continuing to undergo numerous surgeries, her family wrote on the fundraising site.

Before Graham's death, he allegedly told police that a female had entered the residence, poured an unknown substance on him and lit him on fire. Witnesses also reported seeing a white, four-door sedan fleeing the scene and said the suspect was a white female under the age of 30, the police statement says.

Further investigation into the information authorities gathered led them to believe that 19-year-old Emma Presler is responsible for the attack. On Monday, Houston police announced that Presler is charged with murder for Graham's death.

This is the second time Presler has been charged with murder in the past 12 months, according to KTRK, KRIV and KHOU.

In September 2020, Presler was apprehended after authorities found her in a vehicle linked to the drive-by murder of a sleeping 20-year-old woman with cerebral palsy and muscular dystrophy, KTRK reported.

Presler was initially accused of being the gunmen's getaway driver, but a judge determined that while the evidence was suspicious, it was not strong enough to connect her to the shooting, the outlet said.

Her September murder charge was dropped and she was released from custody.

Presler is still wanted by authorities for the Aug. 6 incident. Anyone with information on her whereabouts is urged to contact the HPD Major Assaults & Family Violence Division at 713-308-8800 or Crime Stoppers at 713-222-TIPS.

"Oh God, please, if you know where she is, if you know anything about where she's staying, please, please come forward," Lindros' aunt Lisa Sherlock told KTRK. "Karissa and Devin did not deserve this." 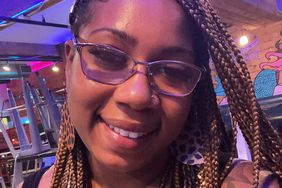